Baseball, soccer teams left in the lurch for arrival of foreign stars 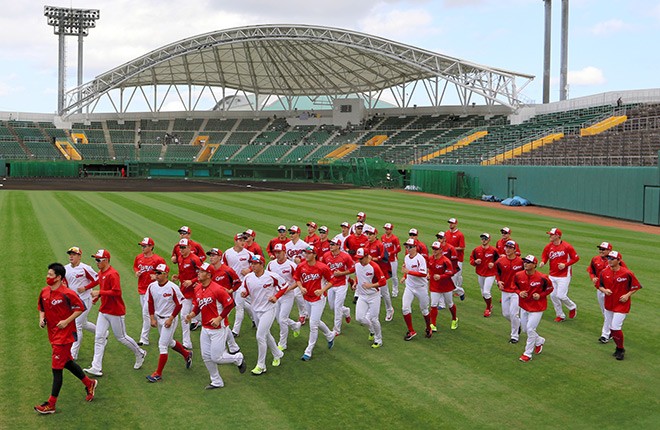 The Hiroshima Toyo Carp opens its spring training camp on Feb. 1 in Okinawa. Fans are not allowed to watch the daily sessions due to the novel coronavirus pandemic. (Jun Ueda)

Although training camps are open and the start of their respective seasons fast approaching, many newly acquired foreign baseball and soccer players are still unable to enter Japan due to travel restrictions amid the coronavirus pandemic.

Nippon Professional Baseball and J.League officials on Feb. 8 decided to work together and urge the central government to ease the entry restrictions and speed up the self-quarantine period.

But officials concede there is no clear solution in sight to bring their new players into the fold as long as the extended state of emergency is in effect for Tokyo and nine prefectures.

According to NPB, a total of 50 foreign players and staffers have yet to join the spring training camps because of the tightened travel restrictions and immigration control due to the novel coronavirus pandemic.

The J.League is scheduled to open the season on Feb. 26. But clubs are still anxiously waiting for 23 players and six staffers, including a head coach, to set foot in Japan.

The foreign players and coaches are seen as vital additions to their teams.

In December, the club announced the acquisition of another veteran Brazilian forward, Wellington Luis de Souza, from Botafogo.

Both players have yet to join the team, because new entries of foreign nationals have been prohibited since the number of COVID-19 cases has surged in Japan.

Bin Ukishima, the head coach of Bellmare, expressed concern that the absence of the two go-to players would have a significant negative effect on their games.

“The impact is huge,” Ukishima said.

The league has set a tight schedule for the upcoming season, and four teams at the bottom will be demoted to the lower-tier J2 division in the following season.

Ukishima said that some clubs have already secured foreign players while others are still waiting for their arrival.

The situation will unfairly affect the outcome of the matches and deprive the latter of a chance for a quick start out of the gate, he pointed out.

“I want the league to discuss adding some restrictions,” Ukishima said, such as limiting the number of foreign players on the squads.

But J.League Chairman Mitsuru Murai on Feb. 8 said after holding an executive committee meeting, “I don’t plan on taking any corrective measures.”

He said setting a special rule in place would end up being unfair.

For Tokushima Vortis, the situation means embarking in uncharted waters at the start of a season without a skipper.

The team will be promoted to the J1 division in the upcoming season for the first time in seven seasons.

In late December, the team officially announced the hiring of a new head coach, Daniel Poyatos Algaba, who has led many teams in Spain.

But on Jan. 15, the team notified the fans on its website that Poyatos would miss the first day of the pre-season activities on Jan. 18. His arrival date remains uncertain because the central government has issued a state of emergency and banned new entries of foreigners.

“We are seeking various ways to help the team remain in the J1 division, and I hope our fans will not worry about it,” Poyatos said in the team's announcement.

Baseball teams have more time to play with until the March 26 season opener.

But many teams are waiting for the government to lift restrictions so that players who have returned to their home countries after the last season can re-enter Japan.

One is Justin Smoak, who has played for many teams including the Seattle Mariners and Toronto Blue Jays, and has hit 196 home runs in his career.

The other is Eric Thames, who has slugged 96 home runs in the majors, playing for the Milwaukee Brewers and other teams.

Both have yet to arrive in Japan.

In the meantime, some teams, anticipating a state of emergency being declared, had their newly acquired foreign players enter Japan sooner.

The situation varies widely depending on each team’s plans and efforts.

NPB and J.League officials held a panel meeting to deal with the novel coronavirus pandemic on Feb. 8. There they agreed to ask the government to allow foreign players to enter Japan and shorten the current two-week quarantine process after entry to 10 days or so.