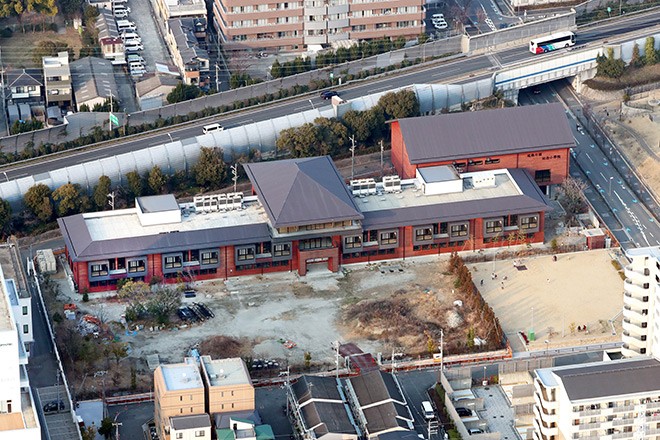 The site in Toyonaka, Osaka Prefecture, where Moritomo Gakuen had planned to open a private elementary school. (Toyokazu Kosugi)

Four years after The Asahi Shimbun first uncovered a questionable sale of state-owned land to a private educational institution at a massive discount, the government’s own rationale for the deal remains buried.

The private school operator Moritomo Gakuen had planned to open an elementary school on the site in Toyonaka, Osaka Prefecture.

Opposition lawmakers argued the huge discount the government provided to Moritomo Gakuen was due to the close ties between the institution’s former head and Akie Abe, the wife of former Prime Minister Shinzo Abe.

The Finance Ministry’s Kinki Local Finance Bureau granted it a discount of 819 million yen ($7.8 million) and sold the lot to Moritomo Gakuen for 134 million yen.

Bureau officials said the discount was intended to pay for the removal of garbage said to be buried on the site. Opposition lawmakers have long demanded that the site be dug up because they argue the garbage was never removed.

But financial issues between Moritomo Gakuen, the central government and the company that had built the school have frozen any progress toward clearing the air.

The school building continues to stand on the land sold to Moritomo Gakuen in June 2016, but the institution eventually abandoned its plans to operate the elementary school.

In June 2017, the central government bought the land back from Moritomo Gakuen for 134 million yen.

A contract provision in the sale to the school operator states that the site must be cleared if the central government decides to buy it back.

Moritomo Gakuen is currently undergoing bankruptcy proceedings, so the central government has asked the bankruptcy administrator, as well as Fujiwara Kogyo Co., the construction company in Suita, Osaka Prefecture, that built the structure, to return the plot to the state it was in at the time of the original sale.

But the construction company claims that Moritomo Gakuen has not paid about 1.5 billion yen of the 2-billion-yen price tag for the structure. In December 2018, it filed for mediation with the Osaka Summary Court, requesting the central government and bankruptcy administrator sell the land and building so it can receive the remainder of the construction costs.

The site is now being managed by the land ministry. In April 2018, the minister at the time said the site could not be dug up due to ongoing negotiations with the two other parties.

On Feb. 8, an official with the West Japan Civil Aviation Bureau that oversees the plot under the land ministry said the situation remains unchanged with mediation still ongoing.

That same plot of land was also at the center of a massive document-falsification scandal where Finance Ministry officials at the Kinki Local Finance Bureau erased all mention of Akie.

One official, Toshio Akagi, committed suicide after suffering from depression because he felt pressured to rewrite the documents.

On Feb. 8, Akagi’s widow, Masako, filed a request with the Osaka District Court that it order the central government to release a file of documents compiled by her late husband that she claims will reveal why he was pressured into rewriting the documents.

The widow has also filed a lawsuit seeking about 112 million yen in compensation and an explanation about why government higher-ups made her husband falsify the documents.