LDP No. 2 Nikai adds fuel to the fire over Mori’s sexist comments 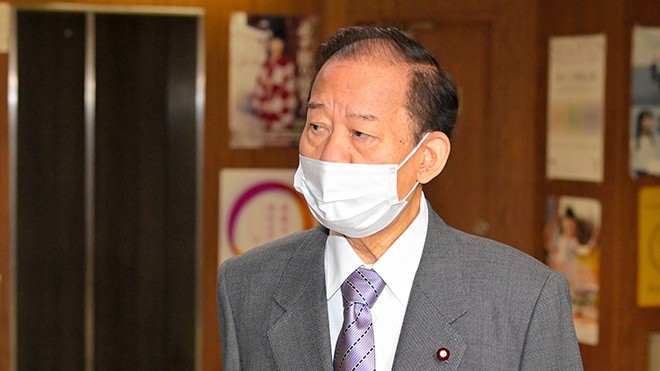 Toshihiro Nikai, secretary-general of the ruling Liberal Democratic Party, before he attends a party meeting in Tokyo on Feb. 9 (Kotaro Ebara)

Nikai, secretary-general of the ruling Liberal Democratic Party, on Feb. 8 commented on reports that volunteers for the Tokyo Olympic Games have quit over Mori’s comments.

“When things calm down, they will change their minds,” Nikai said at a news conference. “If they insist on quitting, new volunteers will have to be enlisted.”

However, the criticism in Japan and overseas has shown no signs of abating.

Officials with the Tokyo Organizing Committee of the Olympic and Paralympic Games revealed that 390 volunteers had quit by noon on Feb. 8.

In addition, two individuals asked the committee for permission to withdraw from the Olympic torch relay.

The committee said it was flooded with 4,550 emails and phone calls protesting the Feb. 3 comments by Mori, president of the committee and a former prime minister.

The Tokyo metropolitan government said it has received 1,162 emails and phone calls mostly to complain about Mori.

At a Feb. 3 extraordinary meeting of the Japan Olympic Committee Council, Mori said that women end up prolonging meetings because of a rivalry among themselves to have their voices heard.

The council at the time was discussing its policy of increasing the number of women on the executive boards of sports organizations.

Demands have grown for Mori, 83, to resign.

The remarks by Nikai about Olympic volunteers were also criticized at the Lower House Budget Committee on Feb. 9.

“His comments conveyed no sense of gratitude to volunteers,” Akiko Kamei, a legislator of the main opposition Constitutional Democratic Party of Japan, said. “They are not ‘things.’”

In response, Seiko Hashimoto, the minister for the Tokyo Olympic and Paralympic Games, agreed that Nikai’s comments were inappropriate.

“Many volunteers were annoyed by what Nikai said,” Hashimoto, a former Olympian, said. “He should have commented after seriously considering their feelings.”

At a news conference the same day, Nikai, 81, defended his remarks, saying, “There was not a deep meaning in them.”

He also declined to give his opinion on Mori’s comments about women.

“I do not believe it is appropriate for the sitting secretary-general of the LDP to talk about somebody who served as prime minister and president of the party,” he said.

But Nikai stressed that he is aware of gender equality.

“Since we were very young, we have been consistently educated that men and women are equal,” he said. “I truly respect women.”

Mori on Feb. 4 retracted his comments and apologized at a news conference. But his words were unconvincing.

“Mori did not look that he was apologizing,” said one individual who contacted the metropolitan government.

“The entire Japanese society will be misunderstood overseas by his comments,” said another.

The Tokyo organizing committee sent emails to about 80,000 volunteers to apologize for Mori’s comments.

The committee is expected to call an extraordinary meeting this week on the Mori issue.