Virus-response powers widened for areas not under emergency 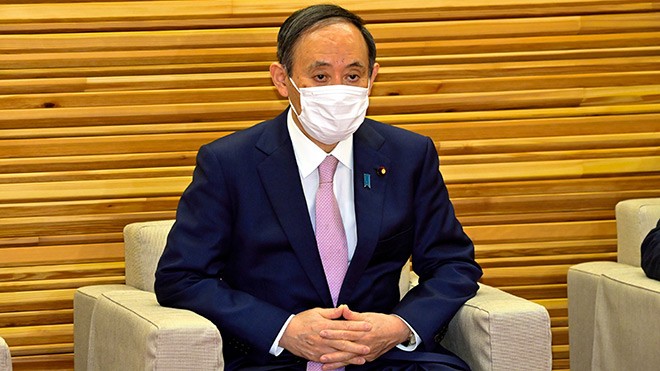 Prime Minister Yoshihide Suga at a meeting of his Cabinet on Feb. 9 (Kotaro Ebara)

Prime Minister Yoshihide Suga’s Cabinet has approved new anti-coronavirus measures that prefectural governors can employ when a state of emergency is not in place, boosting their ability to control the spread of infections.

The Cabinet order, approved on Feb. 9, gives prefectural governors the authority to request or order businesses to change business hours and take infection-prevention measures, such as placing disinfectant containers at entrances or prohibiting people not wearing face masks from entering.

All the measures carry fines for individuals and businesses that refuse to comply.

It follows the revision earlier this month of a special measures law that deals with the health scare. Those changes introduced a set of concentrated measures that can be put in place before a state of emergency is declared. In that instance, the aim would be to curb infections early enough so that a state of emergency may not be needed.

The measures can also be used after a state of emergency has been lifted to prevent the virus’ spread from rebounding.

The revised special measures law takes effect on Feb. 13, and the Cabinet order lays out the necessary conditions to implement the concentrated measures.

“We will use the provisions in a flexible manner to restrain a further spread of infections by all means,” said Yasutoshi Nishimura, the state minister in charge of economic revitalization, who also heads the central government’s handling of the novel coronavirus pandemic.

He was speaking at a Feb. 9 meeting of a government panel of experts dealing with the COVID-19 health scare that went over the details of the Cabinet order.

Under the new rules, prefectural governors can specify the types of eateries or bars covered by their requests and orders. The decision on which types of businesses to target would be based on the number of infections or infection clusters linked to them.

Governors will be able to encourage staff at eateries to test for COVID-19, as well as limit the number of entrants to a business or event.

Governments can also bring about extra measures if the health minister decides such steps would help curb the spread of infections.

Individuals and businesses that refuse to comply with any of the measures without a good reason will face a maximum fine of 200,000 yen ($1,900).

Governments can bring about the new, concentrated measures when concerns emerge in a prefecture over a rapid rise in infections, and when the local medical care structure comes under strain based on the number of new COVID-19 cases and patients with untraceable infection routes.

The expert panel meeting also addressed what measures to implement to allow for lifting the state of emergency now in place in 10 prefectures until March 7, and for preventing a second surge in infections as well.

Shigeru Omi, who heads the panel, said one big lesson learned over the past year is that traditional seasonal activities have a major influence on the spread of infections.

He urged restraint regarding farewell parties and group trips toward March, which marks the end of the fiscal year and the end of the school year as well. Companies normally assign major personnel transfers for the start of the new fiscal year, often accompanied by parties to bid farewell to those leaving and for welcoming new colleagues into the workplace.

Two economists on the panel, Fumio Otake, a professor at Osaka University, and Keiichiro Kobayashi, a research director at the Tokyo Foundation for Policy Research, submitted projections on how the start of vaccinations for COVID-19 will affect public health and the economy.

The two scholars estimate that if vaccinations of senior citizens begin in the first week of April and some 4 million people get vaccinated every week until the end of June, the number of fatalities from COVID-19 would decrease by about 6,000 and the negative economic effects could also be restrained.

(This article was written by Ayako Nakada and Tomohiro Yamamoto.)