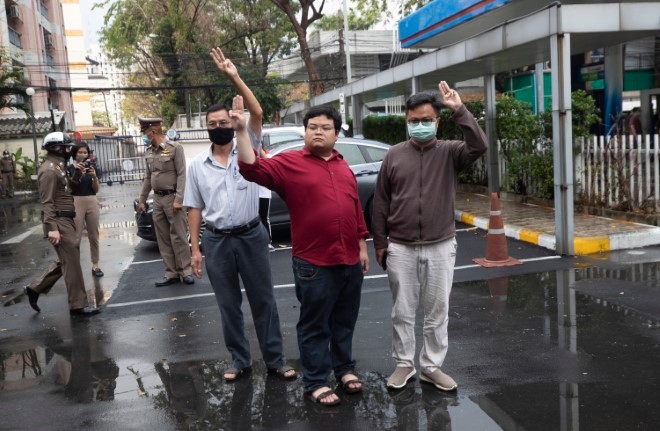 Thai activist Somyot Pruksakasemsuk, left Parit Chiwarak, and Arnon Nampha raise a three-finger salute, a symbol of resistance, as they arrive at the criminal court in Bangkok on Feb. 9. (AP Photo)

BANGKOK--Prosecutors in Thailand on Tuesday charged four prominent pro-democracy activists with sedition and defaming the monarchy for their protest activities.

The case is the first of numerous ones lodged against participants in the student-led protest movement that is being prosecuted by the attorney general’s office. It also is the first in which the defendants are expected to spend significant time in jail, as suspects in other cases have usually been released after arrest.

The protest movement campaigned last year for Prime Minister Prayuth Chan-ocha and his government to step down, the constitution to be amended to make it more democratic and the monarchy to be reformed to make it more accountable.

The demand about the monarchy is the most radical and controversial, because the institution has been widely considered an untouchable, bedrock element of Thai nationalism. It has been considered taboo to publicly criticize the monarch, and insulting or defaming key royals is punishable by up to 15 years in prison per incident under a lese majeste law known as Article 112.

The activists focused late last year on the monarchy issue with speeches and activities that drew an increasing tough response from Prayuth’s government. After earlier pursuing other charges, it began bringing complaints of lese majeste against them. The charge had not been used for about three years at the request of King Maha Vajiarlongkorn.

Prayuth Petchkhun, a spokesman for the attorney general’s office, said that in addition to lese majeste, the four have been accused of sedition and violating the Act on Ancient Monuments, in connection with a rally held in a public field near the Grand Palace.

On Monday, U.N. human rights experts issued a statement expressing concern over Thailand’s increasingly severe use of the lese majeste law to curtail criticism of the monarchy. The statement followed the case of a Thai woman who was sentenced to 34 1/2 years in prison for material she reposted on social media.

“We have repeatedly emphasized that lese majeste laws have no place in a democratic country,” the U.N. experts said. “Their increasingly harsh application has had the effect of chilling freedom of expression and further restricting civic space and the enjoyment of fundamental freedoms in Thailand.”

The protest movement struck a chord with many Thais but alienated others, especially royalists shocked at its criticisms of the monarchy. The movement began to lose steam late last year amid differences among its factions, and because of a resurgence of the coronavirus in Thailand. Recently it has been overshadowed by anti-coup protests in neighboring Myanmar.