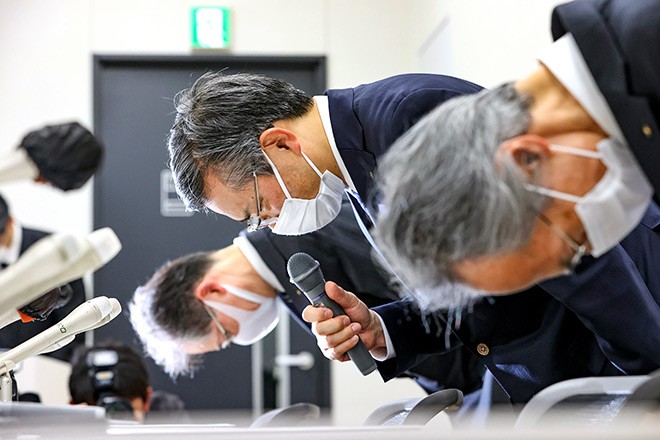 Hiroyuki Kobayashi, second from right, bows in apology at a news conference in Awara, Fukui Prefecture, on Feb. 9 for his company’s mistake in producing a prescription drug. (Yuki Shibata)

AWARA, Fukui Prefecture--Prefectural authorities shut down a drug maker here that faked pharmaceutical test results for decades and accidentally mixed a sleeping drug into medication for athlete’s foot that may have caused two deaths.

Kobayashi Kako Co. on Feb. 9 was ordered to suspend its business operations for 116 days for various legal violations and cover-ups. It was the longest suspension order in Japan in connection with breaches of the pharmaceutical and medical device law, according to the health ministry.

Kobayashi Kako’s president, Hiroyuki Kobayashi, indicated that he will step down.

“My responsibility is extremely grave, and I am thinking about resigning from my position at a right time,” he said at a news conference in Awara on Feb. 9. “Our production teams have put efficiency ahead of compliance and observation of the rules. Haphazard procedures have become routine for employees to get the drugs shipped on time.”

At the center of the business suspension order is Itraconazole 50 Meek, a generic prescription drug used to treat athlete’s foot.

The medication produced in June and shipped between September and December was mistakenly mixed with a sleep-inducing component. The amount accidentally mixed in was 2.5 times the maximum dose normally used in each sleeping tablet.

As of Feb. 8, 324 patients were prescribed the athlete’s foot tablets in question, according to the company.

A man in his 80s and a woman in her 70s died after taking the foot medication, while 239 patients, or more than 70 percent of the total, complained about health problems, the company said.

Of them, 41 were hospitalized or required ambulances. Twenty-two traffic accidents were connected to the tainted drug.

Prefectural officials and other investigators said the production process of the medication included steps that were not approved by the ministry.

In addition, the company showed a document to prefectural authorities  during onsite inspections that falsely said it was following ministry-authorized procedures to produce Itraconazole 50 Meek.

The company also shipped the drug after it falsified the outcome of a quality check, they said.

Kobayashi Kako, a maker of generic drug, has two factories that produce about 500 products.

Legal violations were discovered in the manufacture of nearly 80 percent of the products, including preparing false documents to clear prefectural authorities’ inspections and falsifying test results of the medications.

Investigators said they found the company started falsifying test results about 40 years ago. But executives and managers on the ground did not order a stop to the practice despite being aware of the legal violations, according to prefectural officials.

They said Kobayashi was in charge of overseeing production of medications from 2005 and 2007 and became aware of the misconduct in 2005. He failed to take appropriate measures to halt the problem, they said.

The company, founded in 1946, has grown rapidly since early 2000 after the ministry promoted the use of generic drugs to rein in the country’s medical fees. Sales jumped to about 37 billion yen ($352 million) in fiscal 2019 from 3 billion yen in fiscal 2002.

As of last October, the company had about 800 employees, nearly four times its workforce in fiscal 2009.

The previous record for a suspension order in the industry was 110 days issued in 2016 against a research institute in Kumamoto. It had produced a blood product using procedures not approved by the Ministry of Health, Labor and Welfare.