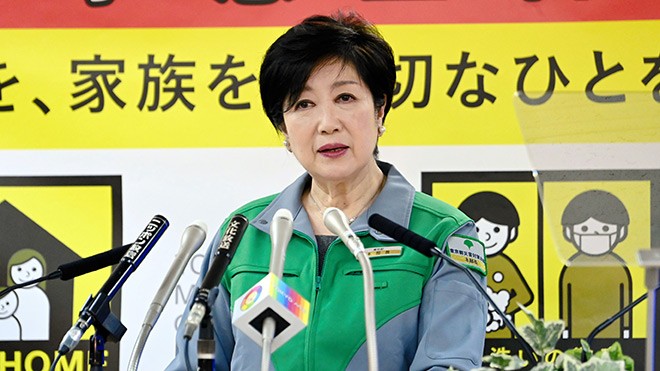 Tokyo Governor Yuriko Koike holds a news conference on Feb. 2 after the central government announced that the state of emergency was extended. (Asahi Shimbun file photo)

Tokyo Governor Yuriko Koike said she will skip a top-level meeting concerning the Summer Games after Tokyo Olympic organizing leader Yoshiro Mori “disgusted so many people” with his sexist remarks.

“I don’t think we can send out a positive message even if we hold a four-party meeting here now, so I won’t attend the meeting,” Koike told reporters on Feb. 10.

The meeting, scheduled for Feb. 17, was expected to include Mori, Koike, International Olympic Committee chief Thomas Bach and Seiko Hashimoto, minister for the Tokyo Olympics and Paralympic Games.

Criticism continues over Mori’s remarks made on Feb. 3 at a Japan Olympic Committee Council meeting. He said women prolong meetings because they are competitive and feel the need to talk and have their opinions heard.

The metropolitan government said it had received at least 1,405 emails and phone calls protesting Mori’s remarks by the evening of Feb. 9, and that more Olympic volunteers have quit.

“First of all, while we need to contain the pandemic and pump up the Olympics, his remarks disgusted so many people,” Koike said. “As a leader of the host city, I think that his comments were very, very regrettable.”