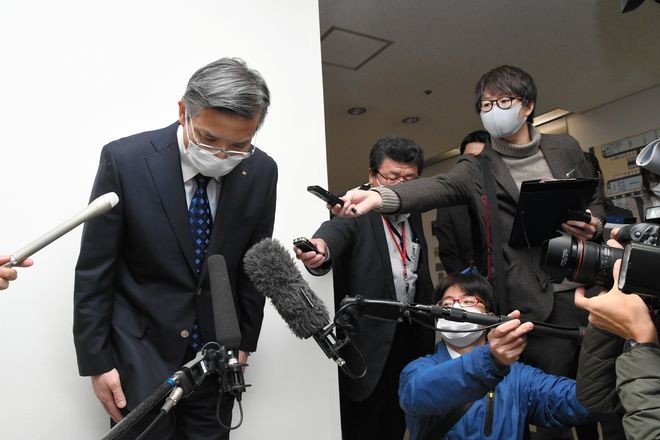 Hiroyuki Kobayashi, president of Kobayashi Kako Co., bows in apology at the Fukui prefectural government building on Feb. 9 after he received a written order to suspend operations. (The Asahi Shimbun)

Some medications do nothing but harm, and numerous cases of prolonged use of such drugs have been reported throughout the history of medicine.

For decades, medicines containing mercury were administered as a panacea for complaints ranging from depression to constipation and syphilis.

U.S. President Abraham Lincoln, who suffered from a chronic headache before he became president, was on such a drug.

He displayed symptoms of mercury poisoning, such as temper tantrums, according to “Quackery: A Brief History of the Worst Ways to Cure Everything,” co-authored by Lydia Kang and Nate Pedersen.

An extremely dangerous medicine has been lurking in present-day Japan, too.

Kobayashi Kako Co., a drug maker, has been ordered to suspend operations for marketing an oral medication, tainted with sleep-inducing substances, for athlete’s foot and other skin conditions.

The danger lay not in the limits of medicine, but in the company’s limitless disregard of rules.

The company had a “covert manual” that justified the addition of drug substances during production, even though such a procedure is not authorized by the health ministry.

The company also disregarded the requirement that its products be checked by two-person teams, and it shipped products even when problems were detected during inspection.

The Asahi Shimbun recently ran an account by a person who took the medication and then drove a car, lost consciousness at the wheel, and came to after the car had rolled downhill and finally stopped when it ran on a roadside stone.

It’s terrifying that something you take to feel better can seriously endanger your life.

The president of Kobayashi Kako admitted that the cause of the problem was that the company “has put efficiency ahead of compliance and observation of the rules.”

But “efficiency” has nothing to do with pursuits in total disregard of the user’s welfare, and that goes for any manufacturing business.

It is said that the wise learn from history, and the foolish from experience.

Every time corporate disregard for safety becomes news, I just wish businesses would at least learn from the mistakes of others, if not from history.