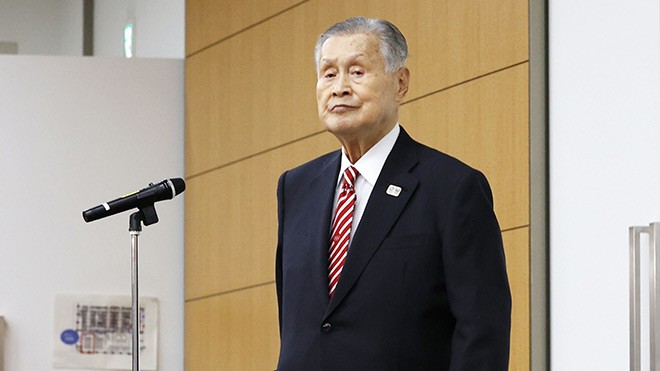 Yoshiro Mori, head of the Tokyo Olympic organizing committee, after a news conference on Feb. 4 (Pool)

One stormy week has passed since Yoshiro Mori, president of the Tokyo Olympic organizing committee, touched off an uproar with his sexist remarks.

The confusing reverberations caused by his remarks about women at a meeting of the Japan Olympic Committee Council have become more disruptive by the day.

The organizing committee, which has so far failed to take effective actions to clean up the situation, and the Japanese government, not to mention Mori himself, are facing a growing international wave of criticism and distrust.

Mori’s outrageous remarks have caused immeasurable damage to the Summer Games, whose value has been called into question because of the novel coronavirus pandemic.

Committee executives and other decision makers involved should realize the seriousness of the situation and take swift actions to overhaul the committee’s leadership.

While he has retracted his remarks, Mori has refused to step down. His irritable manner in responding to questions at a news conference has only provoked more criticism.

Some Japanese political leaders have added fuel to the fire with their own comments and actions.

Prime Minister Yoshihide Suga criticized what Mori said as an “unacceptable remark” but did not comment on whether he should resign, saying it is not up to him to decide on the matter.

But Suga was a leading member of the previous administration, which effectively picked Mori as the chief of the organizing committee and decided last spring to postpone the event by one year.

How Suga has tried to avoid taking responsibility to deal with the situation does not befit the important roles he has played in managing Olympic-related operations.

JOC President Yasuhiro Yamashita, a former judo champion, who should embody such Olympic values and ideals as rejecting all forms of discrimination and gender equality, has said he wants to see Mori “fulfill his duties to the end.”

After Mori’s apology at the news conference, the International Olympic Committee initially said it considered "the issue closed.”

But many people responded to these remarks and actions made by political leaders and Olympic executives by expressing their indignation and objections. Hundreds of Olympic volunteers have quit in protest.

Failing to hold Mori responsible for his comments and letting him off the hook would be tantamount to disrespecting efforts by many people to end gender inequality and overlooking and tolerating the grim reality of Japan as a country with a poor track record on gender equality.

But Toshihiro Nikai, secretary-general of the ruling Liberal Democratic Party, and some Cabinet members have only intensified people’s anger by making insensitive remarks to defend Mori, throwing the situation into a vicious cycle.

If the Suga administration continues sitting on the fence, the Olympic organizing committee is the only entity that can put the matter to rest.

The six councillors headed by Saburo Kawabuchi, executive adviser for the Japan Football Association, have the power to dismiss Mori and other members of the committee’s executive board, which also is empowered to sack the president and other top officials, according to the committee’s rules.

The councillors and the executive board are scheduled to hold a joint meeting on Feb. 12. The committee should publish discussions of the meeting and disclose the views of the members about Mori’s remarks, the background behind the comments and actions the committee should take from the viewpoint of the future of the Olympics.

If this meeting fails to send a clear message about its stance toward the issue by exercising the kind of self-restraint advocated by Mori, the committee will find itself completely alienated from the public.

The responses of Tokyo, the host city, are also drawing attention. Tokyo Governor Yuriko Koike initially refrained from criticizing Mori but has ratcheted up her rhetoric against his comments in tandem with public opinion.

But Koike cannot simply remain on the sideline in the face of what is happening. The confusion will test her ability to manage a crisis and put things back on track.