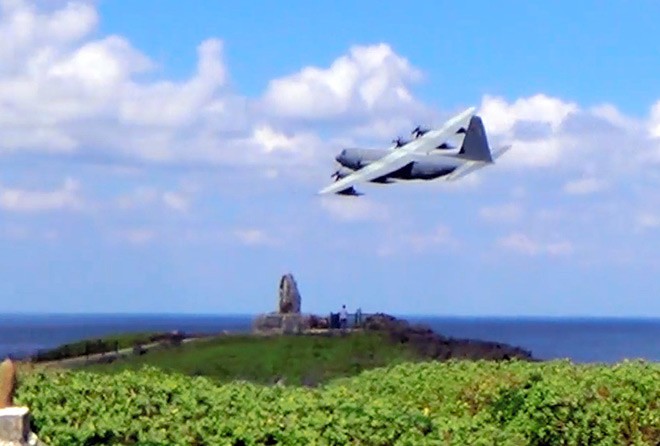 A U.S. military aircraft is seen flying low over Cape Hedo, the northernmost tip of the mainland of Okinawa, on Feb. 4. (Provided by Muneyuki Kayo)

NAHA--Muneyuki Kayo was looking forward to watching whales off the northernmost Okinawa mainland, but what he saw instead on Feb. 4 is a sight that is stirring anger among Okinawans.

Kayo, 67, who has observed sea life for more than 20 years, said he has spotted low-flying aircraft he believed belonged to the U.S. military before but they were flying offshore.

“I have never seen an (aircraft) getting this much closer,” Kayo said. “It was so low that I thought it would hit a rock.”

Over the protests of locals here, the U.S. military has apparently continued dangerous low-altitude flights over public places.

The prefectural assembly’s special committee that handles issues related to U.S. military bases held an emergency meeting on Feb. 10 and drafted a resolution of protest against the practice.

The resolution urges the U.S. ambassador in Japan and the commander of U.S. Forces Japan, among others, to immediately halt the military’s low-altitude flight training.

The assembly is expected to pass the resolution after discussing it at a plenary session.

The flights seen by Kayo occurred on Feb. 4 over the picturesque Hedo Misaki (Cape Hedo), which is located in Kunigami village in Okinawa Prefecture.

He reported seeing a large, noisy U.S. military plane flying from the east and along the coastline before heading south at a little past 11 a.m.

Kayo said he spotted another low-flying U.S. military aircraft at around 1:25 p.m.

The area surrounding the cape is designated a national park, and U.S. Forces are not supposed to conduct training there.

Since the end of 2020, similar low-altitude flights of U.S. military aircraft have been reported in Tokashiki and Zamami villages in the prefecture, both part of Keramashoto National Park.

In January, the prefectural assembly rebuked the practice and urged the U.S. forces to halt the flights.

The prefectural government and the Okinawa Defense Bureau inquired about the latest incident with the U.S. military, which confirmed that it had conducted training exercises to maintain the skill levels of pilots.

U.S. Forces officials said it conducts all flight training based on the relevant agreements between Japan and the United States.

The officials said the details of flight altitudes and routes cannot be disclosed because they involve operational safety.

Moriyuki Teruya, a prefectural assembly member who heads the assembly’s special committee, expressed frustration that the concerns of local residents and officials are not being heeded.

“We just protested against the (low-altitude flights in Keramashoto),” Teruya said. “’Oh no, not again!’ is what locals are feeling. We will strongly oppose the practice to protect the security and safety of residents.”