Japanese women speak out to put ‘misogynist’ Mori in his place 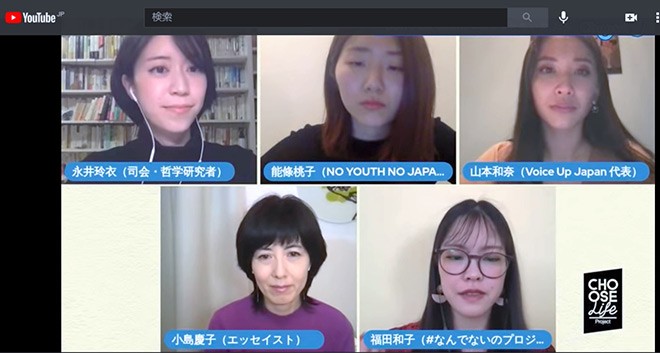 A scene from “Don’t be silent #WomenWhoRefuseToKnowTheirPlace,” an online forum livestreamed on YouTube by Choose Life Project on Feb. 6 (Asahi Shimbun file photo)

Japanese women used Yoshiro Mori’s own sexist words against him and quickly generated a wave of protest against the Tokyo Olympic organizing committee chief and misogyny in society.

The hashtag, “#WomenWhoRefuseToKnowTheirPlace,” has spread widely over social media to show solidarity among women and defiance against sexism.

An online forum titled, “Don’t be silent #WomenWhoRefuseToKnowTheirPlace,” was held by online news media group Choose Life Project on Feb. 6. Twenty-five women who are actively involved in feminism and gender issues talked for about two and a half hours about Mori’s remarks made three days earlier at a meeting of the Japanese Olympic Committee Council.

Council members were discussing the issue of why women are not equally represented on the boards of sports associations and committees.

Mori, 83, chimed in and said, “A board meeting where many women attend takes time” because women “talk long” and it comes from their “competitive” nature.

He continued, “There are about seven women in the (Tokyo Organizing Committee of the Olympic and Paralympic Games), but they all know their place.”

Yayo Okano, a professor at the Graduate School of Global Studies of Doshisha University who specializes in feminism and political theory, was one of the panelists on Feb. 6.

Okano, 53, said Mori “poured salt into an already open wound” of women who “have been forced into silence” and “have suffered particularly in the novel coronavirus pandemic.”

“In the pandemic, many women lost their jobs, and suicides have increased,” she said. “Women who break their backs working in health care, elderly care and child care do not have a minute to spare, let alone voice their complaints.”

She also noted that the “experts” who talk about health care and politics in the media are predominantly men.

“Women cannot speak up, and they are forced to listen to men talking all the time. When women finally speak, they are told, ‘You talk too long,’” Okano said. “Those in power have refused to listen to many different opinions, including women’s. And Mori’s remarks were a culmination of all of that.”

Fuemi, a company employee in her 30s whose tweet last year ignited an online protest against government favoritism related to planned revisions of the Public Prosecutor’s Office Law, also joined the panel.

Fuemi said she, too, “has a habit of knowing her place.”

“Working in the advertising industry, I was taught that assuming a low profile and humble attitude toward men is a virtue. For those who have acquired the ‘habit of knowing their place,’ it requires tremendous courage to state their own opinions. I don’t want them to be hard on themselves even if they can’t express well what they wanted to say,” Fuemi said.

A petition calling on Mori to resign started on Change.org on the evening of Feb. 4. It garnered more than 145,000 signatures within a week, and names were still being added even after news broke on Feb. 11 that Mori was expected to step down as the Olympic organizing chief.

Momoko Nojo, a senior at Keio University who heads No Youth No Japan, an organization that encourages young people’s involvement in politics, started the petition with others.

“Everybody around me viewed (Mori’s remarks) as a problem, but I thought the number of people who think so needed to be visualized,” Nojo, 22, said about the motivation behind the petition. “I wanted our voices to be heard by people like Mori who have status, power, connections and money. But it is impossible if each individual speaks out in a small voice.”

She said people of her generation even feel at odds with the binary classification of gender.

“This issue is not just about Mori and the Olympic Games, but it is a reflection of Japanese society,” Nojo said. “I want many people to realize that this kind of thinking is no longer acceptable.”

The hashtag has also been used among men who take issue with Mori’s comments.

Takayuki Kiyota, an author who has written about gender issues from a male point of view, said, “The remarks were way too cruel, so it was easy for many men to separate themselves from Mori and criticize him.”

Kiyota, 40, also pointed out that those who have publicly defended the former prime minister were “men who are in the same position as Mori, namely people at the top of an organization who are surrounded by yes-men and are unable to do any soul-searching.”

(This article was written by Midori Iki, Azusa Mishima and Erina Ito.)