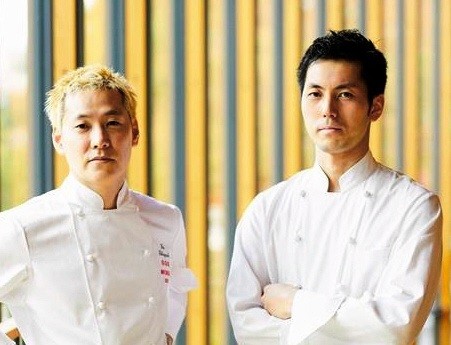 GOTEMBA, Shizuoka Prefecture--The owner of a three-star Michelin restaurant in Paris has opened a sister establishment here, promising French cuisine made with local ingredients served up with a breathtaking view of Mount Fuji.

Kei Kobayashi is the first Japanese to earn three Michelin stars in Paris, thanks to his upscale Restaurant Kei in the French capital.

His new establishment, Maison Kei, opened in Gotemba, Shizuoka Prefecture, on Jan. 30 in collaboration with Toraya Confectionery Co., a long-established Japanese confectionery maker based in Tokyo's Minato Ward. The new restaurant offers French dishes prepared by a first-rate chef at lower prices than its counterpart in France.

According to Toraya, which manages Maison Kei, company President Mitsuharu Kurokawa met Kobayashi, 43, when he was working at the confectionery's Paris branch. They decided to team up to open a sister restaurant back in Japan.

It now stands near Toraya Kobo, the company's studio and shop close to the former Kishi Residence in the city's Higashiyama district.

It is located at the base of Mount Fuji, allowing diners to enjoy meals in a relaxed environment far from bustling city crowds.

Mitsuyoshi Sato, 33, who had worked at Restaurant Kei for six years, cooks the meals there.

For more information, visit the official website at (https://www.maisonkei.jp/).