Replacing Mori not enough, says volunteer who quit over sexism 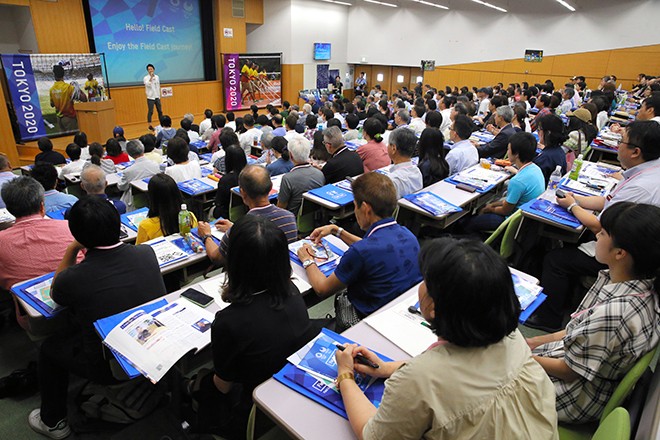 Olympic volunteers listen to a lecture during training in Tokyo in 2019. (Asahi Shimbun file photo)

Sexist comments made by Yoshiro Mori, the head of the Tokyo Olympic and Paralympic organizing committee, have caused numerous Olympic volunteers to back out of the sports extravaganza.

But though Mori subsequently pledged to resign, volunteer Aya Nakajima, who quit over the comments, is unconvinced that the shakeup will result in more respect for women.

“Competitive” women prolong meetings with their need to talk, Mori, 83, said on Feb. 3. “A meeting of an executive board that included many women would be time-consuming.”

The comments were “clearly discrimination against women,” said Nakajima, who saw them that day on social media news reports.

The company employee and resident of Tokyo’s Sumida Ward then canceled her participation as a “Field Cast" Olympic volunteer in protest.

Nakajima said she was shocked to hear that “a person who could have said such things in a public meeting could exist nowadays,” but said she also thought “this exemplifies the situation in Japan.”

Some attendees of the meeting where Mori made the comments laughed in response while some media organizations initially refrained from immediately reporting his remarks as “sexist."

Mori held a news conference to apologize the next day, but also appeared to show misplaced anger over the uproar his comments had raised.

Though Olympic volunteers began backing out one by one in response to Mori's remarks, Toshihiro Nikai, secretary-general of the ruling Liberal Democratic Party, said they were only quitting “temporarily.”

“These people do not recognize what the problem is,” Nakajima said, who added that it had been her dream to volunteer at the Games.

“It has to be just once in a lifetime that the Olympics are held in our town. I also wanted to help add to the excitement for the event, where people will come from all over the world,” she said.

Nakajima said though she made many friends in volunteer training and would miss working at the Games, “I can’t participate in the event hosted by such discriminatory people.”

Mori, who indicated he would resign to take responsibility for his remarks, asked Saburo Kawabuchi, a former Japan Football Association chairman, 84, to succeed him. Kawabuchi on Feb. 12 told reporters that he would not accept Mori's request.

Nakajima was unimpressed with Mori's choice for his replacement.

“I think that it's inappropriate to discriminate based on age,” she said. “But in my opinion, (he) might have outdated ways of thinking.

“Does the organizing committee really understand the root of the issue?” she asked. “It will replace its leader because the International Olympic Committee criticized the comments, but I have a gut feeling that the committee members won’t try to change the organization.”