Mori rejects advice on a successor; his choice bows out 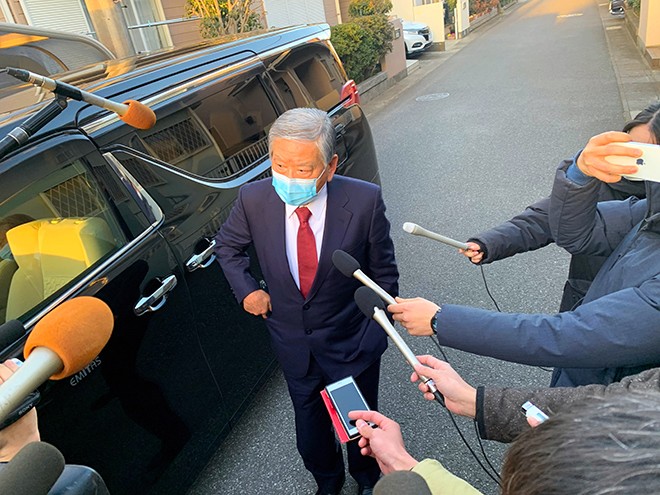 Saburo Kawabuchi, who is in charge of the Athletes’ Village for the Tokyo Olympics, on Feb. 11 (Pool)

Saburo Kawabuchi has decided not to succeed Yoshiro Mori as president of the Tokyo Olympic organizing committee after the offer added to the criticism and bewilderment in the ongoing sexism scandal.

Mori, who has resigned from the post over his offensive remarks against women, offered the position to Kawabuchi on Feb. 11.

Kawabuchi later told reporters that he would do his best to take over from the former prime minister.

But immediately after Kawabuchi’s elation over what he thought was his new job, criticism arose that Mori was in no position to appoint a successor without consulting with a wider group of committee members.

Others said Mori’s choice of another male octogenarian for the post showed he was out of touch with the outrage lodged against him.

When reporters asked Kawabuchi on Feb. 12 about the opposition toward his selection, he said, “If such views are being raised, then I would have to comply with them.”

Mori, who sparked an international outcry by saying on Feb. 3 that women prolong meetings because they are competitive and need to have their opinions heard, apparently rejected advice on how to quell the criticism.

Kawabuchi on Feb. 11 said that he heard from Mori that Thomas Bach, the president of the International Olympic Committee, had suggested to Mori that he and a female co-president run the Tokyo Olympic organizing committee together.

Mori rejected both suggestions and asked Kawabuchi, a man one year his senior, to take over the position, he said.

Kawabuchi said he understood why Suga wanted a younger Tokyo Olympic chief, but he seemed to take offense at the suggestion.

However, others echoed Suga’s view.

One senior member of the Tokyo Olympic organizing committee said Mori should have picked a female former athlete, given the fierce backlash against his sexist remarks.

Another committee official said, “I don’t believe that the public will support a switch to another elderly person.”

Kawabuchi has long held various top positions at sporting organizations. He was the first chairman of the J. League when it began its inaugural season in 1993. He later served as president of the Japan Football Association and Japan Basketball Association.

He also said on Feb. 11 that he was ready to strongly push holding the Summer Games with spectators despite concerns about the novel coronavirus pandemic.

The government expects to decide by spring whether it will limit the number of spectators or even allow overseas visitors at the Tokyo Olympics.

On Kawabuchi’s position, Tokyo Governor Yuriko Koike declined to comment, saying, “I am not aware of that.”

ELITE 4 NO LONGER PART OF OLYMPICS

When the IOC in September 2013 chose Tokyo as the host city for the 2020 Summer Olympics, the major players in the Japanese campaign committee were Tsunekazu Takeda, the president of the Japan Olympic Committee, Tokyo Governor Naoki Inose, Prime Minister Shinzo Abe and Mori.

With Mori’s official resignation on Feb. 12, none of the four are now in a position connected with the Tokyo Olympics.

In November 2013, The Asahi Shimbun reported that Inose received 50 million yen ($477,000) in questionable funds from a medical organization before he ran for Tokyo governor. He resigned the following month and was later found guilty of violating the Public Offices Election Law by falsifying an entry in his political fund report.

In March 2019, Takeda stepped down as JOC president after reports surfaced about illegal money transfers to a key IOC official. He has continued to deny the allegations.

Abe resigned as prime minister in August 2020 for health reasons.