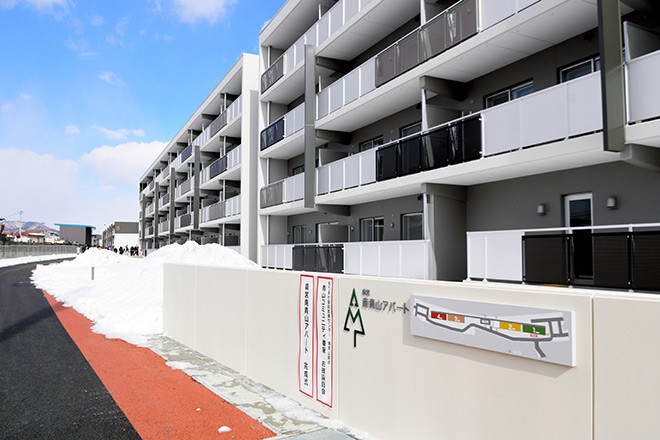 MORIOKA--After many years of waiting, new residents can finally move into the Minami-Aoyama apartment complex here, the last built for victims of the 2011 Great East Japan Earthquake and tsunami.

The public housing complex opened on Feb. 11 for new residents, with more than 30 apartments still empty.

Yoko Minato, 79, who hails from a coastal area in Rikuzentakata, Iwate Prefecture, lost her house when it was swept away by the tsunami.

“Finally, I can have my own house,” she said at a memorial ceremony where she was presented with a key. “I think my neighbors also went through the same kind of experiences, so we would like to support each other.”

Minato is one of some 6,000 people from coastal areas who evacuated inland to places such as Morioka, the capital of Iwate Prefecture.

These kinds of public housing complexes, host to about 30,000 apartments in total, have been built mainly in disaster-hit areas across eight prefectures, and construction has been in the works for a long time. Although just ahead of the 10th anniversary of the disaster, a striking number of apartments remain vacant.

Some municipalities had expressed concerns about evacuees not returning to the coastal areas they came from, so the Iwate prefectural government timed the construction of the buildings very carefully.

The construction projects started around 2016. Officials decided in 2017 to build the Minami-Aoyama complex as well. In total, 283 apartments were built in the inland areas for disaster victims.

But time marched on and eventually a decade had passed since the disaster hit--a long time to spend waiting for housing.

Some people died while they waited for the project to finish. Others gave up on moving there entirely and turned to rentals.

About 100 households had originally submitted requests for new residences, so officials decided that four buildings with 99 apartments would be built. But new residents are only moving into 65 of the apartments.

A total of 29,654 public housing apartments for disaster victims in eight prefectures have already been completed. The number of apartments excludes those that are for people planning to return to areas placed under evacuation orders after the 2011 Fukushima nuclear accident and have yet to be built.

As of last year, there were 479 unoccupied apartments in Iwate Prefecture, 745 in Miyagi Prefecture and 1,013 in Fukushima Prefecture.