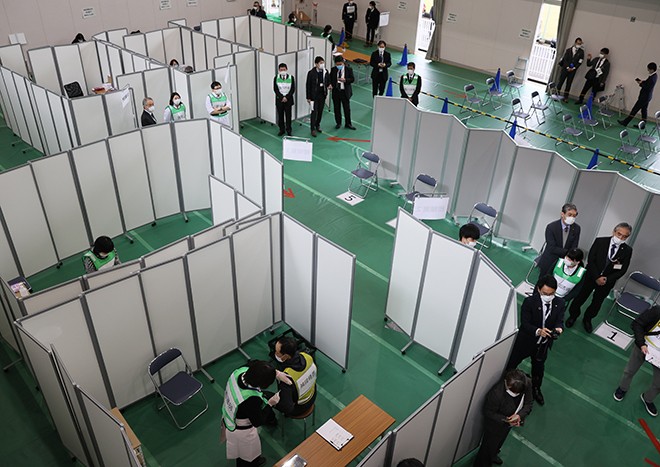 Japan is gearing up to start vaccinating its population against the novel coronavirus as early as Feb. 17 after the first shipment of doses arrived from Brussels.

Senior citizens could begin receiving the vaccine from April 1. Next on the priority list are individuals with a pre-existing health condition and workers at elderly care facilities.

The health ministry is set to formally approve the first vaccine as early as Feb. 14.

An experts’ panel in the ministry gave the green light Feb. 12 for the production and sale of a vaccine jointly developed by U.S. pharmaceutical company Pfizer Inc. and BioNTech, a German biocommerce company.

Once ministry approval is obtained, vaccinations on health care professionals look set to begin next week.

The health ministry signed a contract with Pfizer for about 144 million doses to be provided this year, enough to inoculate around 72 million people.

The first shipment of the vaccine arrived on the morning of Feb. 12 at Narita Airport outside Tokyo from Brussels.

Pfizer submitted an application in December for a special approval procedure based on the results of clinical testing overseas on about 40,000 people. The company submitted additional clinical testing data Jan. 29 that was obtained from 160 Japanese.

The Pharmaceuticals and Medical Devices Agency has been assessing the data provided by Pfizer.

In overseas testing, the infection rate was reduced by 95 percent and a similar level of immunity was found in the test conducted in Japan. There were also no serious side effects, although instances of pain, headache and joint ache matched those in the overseas tests.

Expectant women can receive the vaccine if their doctor feels the benefits outweigh the risks. But those who have displayed a serious allergic reaction to the components of the vaccine will be asked to refrain from being vaccinated.

The central government will pay for the vaccines and people will not be forced into vaccinations.

The first vaccinations will be on 10,000 to 20,000 health care professionals working at about 100 medical institutions around Japan, including hospitals under the National Hospital Organization.

The first group will be monitored for side effects on their health.

All other health care professionals will receive the vaccine from March if no problems arise.

The vaccine has to be stored at minus 75 degrees or so because RNA used to produce it is very fragile.

The government has also signed formal contracts with AstraZeneca, a British pharmaceutical company, for 120 million doses and the U.S. biocompany Moderna Inc. for 50 million doses.

(This article was written by Shuichi Doi and Kohei Tomida.)