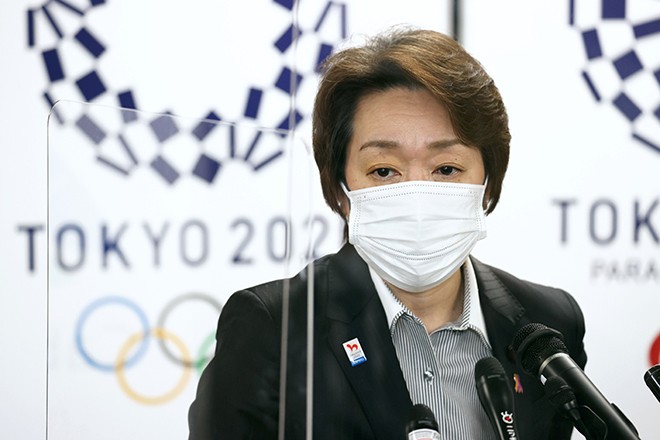 Seiko Hashimoto, the state minister in charge of the Tokyo Olympic and Paralympic Games, holds a news conference on Feb. 12. (Nobuo Fujiwara)

The Tokyo Olympics organizing committee is scrambling to find a replacement after Yoshiro Mori resigned as its head in the face of an uproar over his sexist comments.

Time is of essence with a little more than five months to go before the scheduled start of the sports extravaganza originally slated to kick off in July 2020 but delayed for a year because of the COVID-19 pandemic.

Mori triggered a ruckus that had global repercussions after he complained about having more female board members, which he said led to longer meetings because they all felt a competitive need to have their say.

Mori resigned Feb. 12, but made matters worse by trying to handpick his successor as organizing committee chief.

He sounded out Saburo Kawabuchi, a former president of the Japan Football Association, a day earlier and Kawabuchi initially seemed prepared to take on the task by pledging to do his best.

But less than a day later, Kawabuchi was backtracking and saying he would never take on the position even if he was formally asked.

That was the situation facing an informal gathering of executive board members and councilors of the Tokyo Organizing Committee of the Olympic and Paralympic Games on Feb. 12.

But rather than discuss what had to be done to ensure diversity and prevent another disaster, much of the talk focused on how Mori tried to choose his successor.

Eventually, discussions centered on the process for selecting a successor.

This led to a decision to create a candidate selection committee under Fujio Mitarai, honorary president of the organizing committee.

An equal number of male and female executive board members will be chosen to serve on that committee. However, the names of the members will not be divulged and the committee sessions will be held behind closed doors. The process will be explained once a successor president candidate has been selected.

The candidate will be presented to the entire executive board which would then vote.

Prime Minister Yoshihide Suga also raised objections about Mori picking Kawabuchi, who himself at one time said he was told that Suga wanted someone younger and preferably female to succeed Mori.

But Suga dodged questions from reporters about whether he entered the fray, stating only that he had not spoken with Kawabuchi since Mori asked him to take over.

Some within the ruling Liberal Democratic Party are lobbying for Seiko Hashimoto, the state minister in charge of the Olympic and Paralympic Games, to succeed Mori.

Hashimoto ticks off a number of boxes being female and having taken part in both summer and winter Olympics.

But when asked by reporters Feb. 12 about the possibility of taking the job, Hashimoto only said, “The decision will be made by the organizing committee.”

Mori did not go quietly.

He even took shots at reporters who wrote about his sexist remarks, saying some were intentionally trying to paint him as a misogynist.

Mori, 83, said: “I tried to do my best for Japan and the world. I was deeply disturbed by some comments that seemed to say the elderly were to blame.”