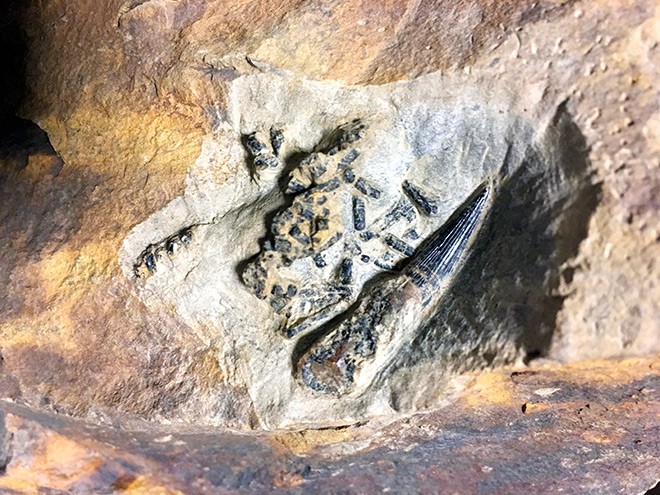 What appears to be a pellet was found in a plesiosaur fossil that contains a long tooth in the bottom right corner. (Provided by the research team)

A “pellet” found in a plesiosaur fossil unearthed in Kagoshima Prefecture indicates the prehistoric creature regurgitated indigestible parts of its prey, much like modern birds and alligators do, a team of researchers said.

The latest research indicates that the long-extinct water reptiles’ digestive system could distinguish indigestible remains of their prey, which was likely swallowed whole because they could not grasp it with their flippers or grind it with their sharp teeth.

The researchers from Tokyo City University and the Kagoshima Prefectural Museum, as well as Satoshi Utsunomiya, who discovered the fossil, announced their findings at an online conference of the Palaeontological Society of Japan on Feb. 6.

Little is known about the lives of plesiosaurs, which had four paddlelike limbs and are classified into a different group from dinosaurs.

“With the latest findings, we can picture how plesiosaurs lived in a more concrete way while previously we could only use our imagination,” said Yasuhisa Nakajima, an associate professor at Tokyo City University.

The pellet, formed from bones and other indigestible parts of prey, was discovered in the throat of the Elasmosaurus plesiosaur species excavated on Shishijima island off the coast of Kagoshima Prefecture.

Also called “Satsuma-Utsunomiyaryu,” the fossilized plesiosaur was found in a 100-million-year-old stratum from the Cretaceous Period by Utsunomiya, a Panasonic Corp. employee, in 2004.

The researchers found many black shards about 1 millimeter thick and 3 to 4 mm long. They were not part of the plesiosaur’s body.

A CT scan revealed that the shards were the remains of material that was finely crushed beyond its original shape and brought together into a lump.

The shards are bilaterally symmetric with an M-shaped cross section, suggesting that they are skeletal elements of a small creature. The fact that they were crushed into fine pieces indicates they were indigestible remnants of prey eaten by the creature, the researchers said.

They concluded that after the plesiosaur swallowed its prey whole, the indigestible materials were pressed into a pellet in its digestive system, and then regurgitated through the gullet.

This plesiosaur apparently died before completely spitting up the pellet, they said.

Modern-day eagles, hawks and owls, as well as alligators and snakes, are known to produce pellets. A fossil of Anchiornis, a bipedal theropod dinosaur, also showed what appeared to be pellets.

What these pellet-expelling creatures have in common are a lack of dexterous limbs to grasp their prey and a lack of a jaw to grind food and help digest prey before swallowing.