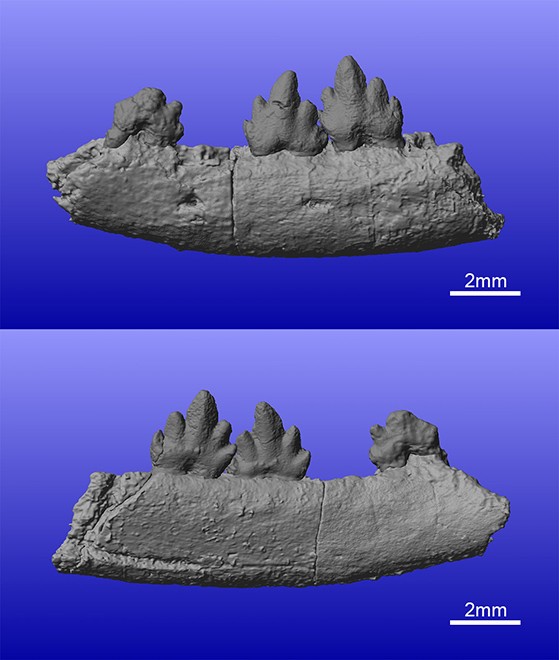 Reconstructed images of the fossil of part of a eutriconodont mammal’s lower left jawbone are shown in a view from outside, top, and a view from inside, bottom. (Provided by the Fukui Prefectural Dinosaur Museum)

The scientists on the team, who are from the Fukui Prefectural Dinosaur Museum in Katsuyama, the Ono City Board of Education and elsewhere, also said a fossil of a mammal-like reptile has been found in the same geological formation.

Both finds are key indicators of the diversity of life during the age of the dinosaurs, the researchers added.

The mammal fossil, one of the oldest of its kind in Japan, was discovered in the Itsuki Formation of the Tetori Group, as the geological feature in Ono is called, by Yusuke Sakai in June 2019.

Sakai, 32, a senior curator with the cultural properties division of the Ono City Board of Education, has been doing excavation studies at the site.

The fossil represents part of a lower left jawbone and measures 13.1 millimeters long and 5.8 mm tall. The jawbone retains teeth with three large cusps arranged in a line, the researchers said.

It was part of a mammal species of the Eutriconodonta group, according to a joint study by the board of education, the dinosaur museum and another institution.

Eutriconodont mammals, which coexisted with dinosaurs, were typically the size of rats and mice, although some of them measured more than 70 centimeters long. Insects were likely part of their diet.

Eutriconodonts are believed to have gone extinct 80 million years ago in the late Cretaceous Period, the scientists said.

Three fossilized eutriconodont species had been discovered earlier in Japan: two in Hakusan, Ishikawa Prefecture, and one in Katsuyama, Fukui Prefecture.

The two species from Hakusan, unearthed from a geological formation 121 million to 130 million years old, are thought to be the oldest of the three.

The researchers said the newfound fossil could replace them as the oldest if the two Hakusan species are dated with more precision.

The shapes, sizes and other features of the teeth also suggest the latest find is a new species. The scientists said they will work further on the matter.

Three months after the mammal fossil was found, a separate fossil of a tooth from the lower right jaw of a tritylodontid was discovered in the same geological formation. The tooth measures 7.4 mm long and 4.7 mm wide.

Tritylodontids were a mammal-like reptile group of herbivores the size of rabbits and hares. They were halfway in the evolution process from reptiles to mammals.

The Ono site is the fourth in Japan to have produced a tritylodontid fossil, the scientists said.

“I think dinosaurs are associated with Katsuyama in the imagination of many people, but I want them to know that Ono has also produced key fossils,” Sakai said.

Tritylodontids were believed to have gone extinct before the Cretaceous Period under the pressure of mammals, their prosperous rivals. However, recent research has established that they survived into the early Cretaceous Period.

The latest discovery has reconfirmed that they coexisted with mammals, the researchers said.

“Ono is home to geological formations that are older than those in Katsuyama, so the site provides valuable clues to the age of the dinosaurs,” said Kazunori Miyata, a 51-year-old senior researcher with the dinosaur museum. “We hope to continue with our excavation studies in Ono.”

The two newfound fossils are scheduled for public display at the dinosaur museum from mid-March and in Ono from mid-April. The research results were presented Feb. 7 to an online meeting of the Palaeontological Society of Japan.