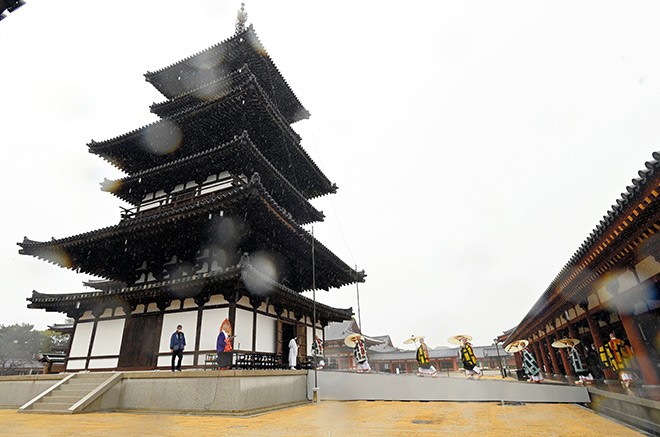 A ceremony is held on Feb. 15 to mark the end of the first restoration work on Yakushiji temple’s East Pagoda in Nara in more than 100 years. (Nobuhiro Shirai)

NARA--About 10 Buddhist monks chanted a sutra at a ceremony at Yakushiji temple here on Feb. 15 to celebrate the completion of the first restoration work on the World Heritage site's renowned East Pagoda in more than a century.

Some 60 officials of the Cultural Affairs Agency and the Nara prefectural government attended the event.

The roughly 34-meter-tall pagoda, a national treasure thought to have been built in the early eighth century, was taken apart for the first time in about 110 years during the work.

The pagoda is a three-story wooden structure, with each story featuring a smaller roof, called “mokoshi,” under a conventional roof. The structure is often described as “frozen music” because its architectural design gives off a rhythmical appearance from the way it interchanges between large and small roofs.

The restoration work began in 2009 and was completed in December last year, according to officials of the temple.

The pagoda's interior will be opened to the public between March 1 and Jan. 16, 2022. But the officials have yet to decide when to hold a reopening ceremony due to the COVID-19 pandemic.