153 people injured in quake, most in Fukushima and Miyagi 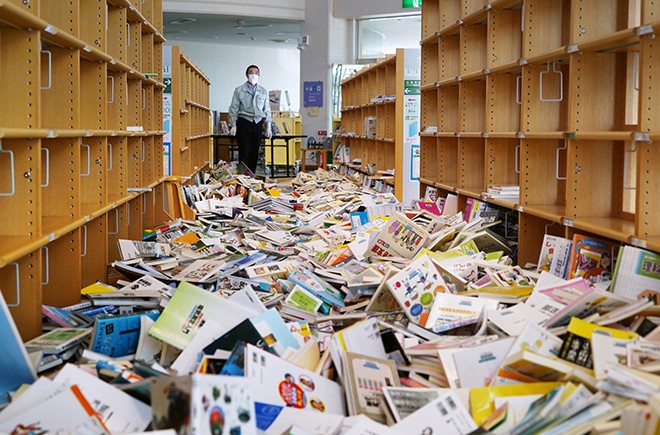 Most of the 80,000 books that fell from the shelves at a public library in Shinchi, Fukushima Prefecture, on Feb. 14 due to a powerful earthquake the previous night are piled high on the floor. (Shigetaka Kodama)

The number of people injured by a powerful earthquake in northeastern Japan two days earlier rose to 153, but no deaths were reported as of Feb. 15.

Of the 153, 12 suffered serious injuries, according to the government's Fire and Disaster Management Agency.

Fukushima and Miyagi prefectures accounted for most of the injuries, with 81 and 55, respectively. The rest were reported in seven prefectures in eastern Japan.

No one has been reported missing, the agency added.

Most of the major damage from the magnitude-7.3 quake that occurred at 11:07 p.m. on Feb. 13 off the coast of Fukushima Prefecture was concentrated in Fukushima and neighboring Miyagi prefectures.

In Fukushima Prefecture, a slope along the Joban Expressway collapsed between the Soma and Shinchi interchanges, blocking the road for 70 meters with debris 15 meters high, according to operator East Nippon Expressway Co.

The earthquake’s shaking was felt the severest in Shinchi, a town located in the northernmost part of Fukushima Prefecture, with an intensity of upper 6 on the Japanese scale of 7 recorded.

The second floor of Shinchi library turned into a major cleanup for staff after most of about 80,000 books in the collection tumbled to the floor from the shelves.

“It was a small mercy that we did not have a tsunami this time,” said a librarian who experienced the magnitude-9.0 Great East Japan Earthquake and tsunami on March 11, 2011. The earthquake on the night of Feb. 13 is an aftershock of the 2011 quake, according to the Meteorological Agency.

More than 20 stone lanterns were damaged and a crack measuring 3-4 meters long occurred on the premises of a Shinto shrine in Soma in the prefecture.

“I wish I could start with cleanup work, but I am scared of another aftershock,” said the 67-year-old manager of the shrine.

In Koori, a town next to the prefectural capital of Fukushima, about 100 bottles of sake and wine hit the floor at a liquor shop.

“At a time of the coronavirus pandemic we are enduring, things went from bad to worse,” said the 71-year-old shop owner of the late-night temblor.