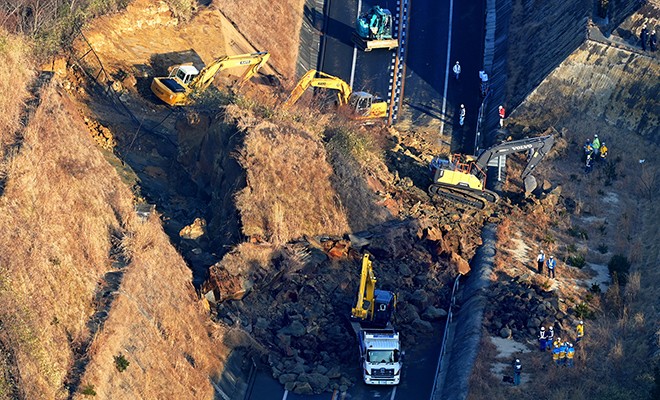 Dirt from a landslide blocks the Joban Expressway in Soma, Fukushima Prefecture, on Feb. 14. (Ryo Kato)

For many people, the powerful quake on the night of Feb. 13 must have come as a disquieting reminder of the Great East Japan Earthquake 10 years ago.

The quake, which occurred off the coast of Fukushima Prefecture, recorded a maximum intensity of upper 6 on the Japanese scale of 7, injuring many people in Fukushima and Miyagi prefectures. Many suffered injuries as they fell or were hit by falling objects.

Aftershocks have continued, and heavy rain fell, as if pouring salt on the wound. To add to the misery, weather forecasts warn that it will become as cold as midwinter in the middle of this week.

The Fukushima prefectural government has decided to apply the disaster relief law to affected municipalities to provide support. Even though the novel coronavirus has been relatively under control in the Tohoku region, there is no room for complacency.

Administrative authorities should make all-out efforts to prevent secondary damage from the temblor and help residents rebuild their lives while doing the best possible job of preventing the spread of infections.

Multiple nuclear power facilities are located in areas shaken violently. Fortunately, none of them has suffered notable damage. But we find it hard not to worry about the Fukushima No. 1 nuclear power plant.

Water is being poured into the No. 1-3 reactors to cool debris of melted nuclear fuel from the accident triggered by the 2011 earthquake and tsunami, accumulating highly radioactive water. A large amount of nuclear fuel also remains in pools to store spent fuel.

With decommissioning work delayed by these sticky problems, what if the crippled plant is hit by another gigantic earthquake?

Tokyo Electric Power Co., the operator of the plant, should make a meticulous and detailed inspection of the plant and take safety measures to ensure that there will be no serious incidents, such as the leak of contaminated water or the release of radioactive materials into the atmosphere.

The weekend earthquake occurred inside the oceanic Pacific plate, which subducts beneath the continental plate, according to the Japan Meteorological Agency.

Since the focus was relatively deep at 55 kilometers below the surface, the temblor did not significantly transform the seabed topography. That is, according to the agency, the reason why it did not cause a major tsunami.

The magnitude of 7.3 is as strong as the 1995 earthquake that ravaged Kobe and its vicinity and the 2016 Kumamoto earthquake, which caused serious damage in Kumamoto Prefecture and surrounding areas.

Since the latest one generated strong short-period ground motions, many small structures such as concrete block walls were toppled, but large buildings were spared major damage.

March 11 will mark the 10th anniversary of the magnitude-9.0 Great East Japan Earthquake. But 10 years are nothing but an instant in the history of the Earth. Aftershocks from that devastating quake can still take place. In fact, more earthquakes occur in the region now than before the 2011 disaster, according to the agency.

The Feb. 13 quake should serve as a fresh opportunity for all of us to recognize the reality that the region remains seismically active and re-evaluate our preparedness for major quakes.

In particular, companies responsible for such vital elements of social infrastructure as power supply and railway services bear heavy responsibility for better preparing the nation for earthquakes.

East Japan Railway Co. (JR East) has been forced to suspend operations on the Tohoku Shinkansen Line due to damage including leaning utility poles. The company said it will take 10 days or so to resume full operations.

The quake also caused temporary large-scale power outages in various parts of the Tokyo metropolitan area, underscoring afresh the vulnerability of the power supply system for the area, which depends heavily on thermal power plants in the Tohoku region.

The quake should lead to swift actions by organizations concerned to identify and fix overlooked vulnerabilities and problems with safety measures.