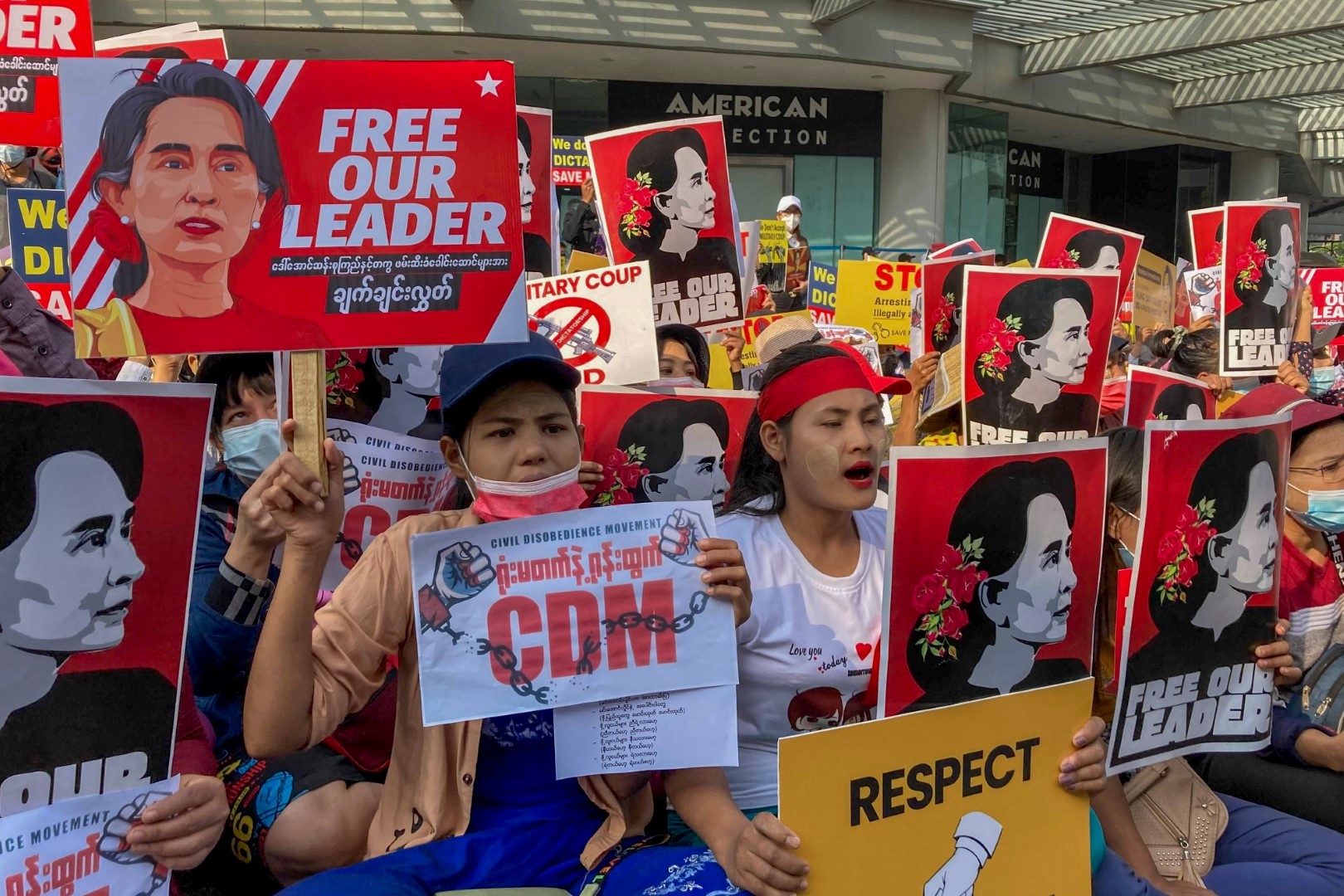 The United Nations special envoy has warned Myanmar’s army of “severe consequences” for any harsh response to protesters demonstrating against this month’s coup in a call with the military leadership, a U.N. spokesman said.

Despite the deployment of armored vehicles and soldiers to some major cities at the weekend, protesters have kept up demonstrations to denounce the Feb. 1 takeover and demand the release of detained leader Aung San Suu Kyi and others.

Protests on Monday were smaller than the hundreds of thousands who had joined earlier demonstrations but broke out in many parts of the Southeast Asian country, where the coup has halted a decade of unsteady transition to democracy.

A small crowd began gathering outside the central bank early on Tuesday to press staff there to join a civil disobedience movement.

The army cut off the internet for a second consecutive night early on Tuesday though it was again restored at about 9 a.m. (0230 GMT)

The internet suspensions have raised concern among coup opponents, particularly after the army suspended legal constraints on its search and detention powers.

“There is suspicion this blackout was to commit unjust activities, including arbitrary arrests,” said the Assistance Association for Political Prisoners group, which has recorded 426 arrests between the coup and Monday.

U.N. Special Envoy Christine Schraner Burgener spoke on Monday to the deputy head of the junta in what has become a rare channel of communication between Myanmar’s army and the outside world.

“Ms Schraner Burgener has reinforced that the right of peaceful assembly must fully be respected and that demonstrators are not subjected to reprisals,” U.N. spokesman Farhan Haq said at the United Nations.

“She has conveyed to the Myanmar military that the world is watching closely, and any form of heavy-handed response is likely to have severe consequences.”

In an account of the meeting, Myanmar’s army said junta Number Two, Soe Win, had discussed the administration’s plans and information on “the true situation of what’s happening in Myanmar.”

The unrest has revived memories of bloody outbreaks of opposition to almost half a century of direct army rule that ended in 2011 when the military began a process of withdrawing from civilian politics.

The army said late on Monday that protests were harming stability and had left people in fear.

“People are delighted to have the security patrols and the security forces will conduct them day and night,” its True News information team said.

Violence during the protests has been limited compared with that under previous juntas, but police have opened fire several times, mostly with rubber bullets, to disperse protesters, including on Monday.

One woman who was hit by police fire in the capital Naypyitaw last week is not expected to survive.

As well as the demonstrations in towns and cities, a civil disobedience movement has brought strikes that are crippling many functions of government.

The army took power alleging fraud in a Nov. 8 general election in which Suu Kyi’s National League for Democracy party had won a landslide. The electoral commission had dismissed the army’s complaints.

Suu Kyi, 75, spent nearly 15 years under house arrest for her efforts to end military rule and is again being kept under guard at her home in Naypyitaw.

She now faces charges of illegally importing six walkie-talkie radios and is being held on remand until Wednesday.

The coup has prompted an angry response from Western countries and the United States has already set some sanctions against the ruling generals.

But China has taken a softer approach, arguing stability should be the priority in its neighbor, where it has close contacts with the military.