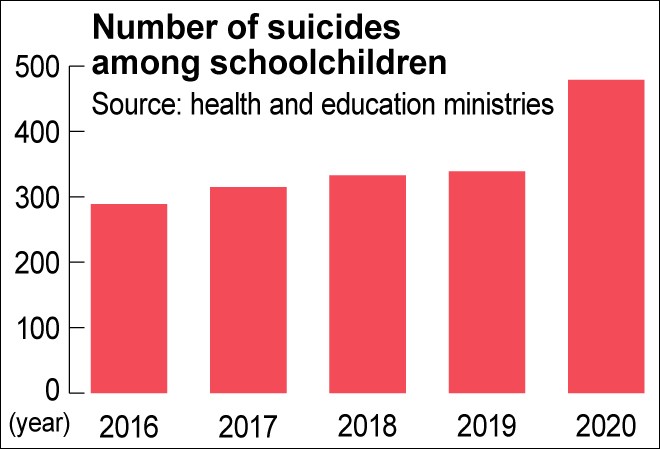 The number of suicides among schoolchildren in 2020 surged by about 40 percent year on year to a record high 479, according to a provisional report by the education ministry.

Sharp increases in suicides occurred in the months when schools resumed classes after long-term closures under the COVID-19 pandemic, the report showed.

Among senior high school students who killed themselves, 191 were male, up by 21 from the previous year, while suicides among females doubled by 71 to 138.

“Their schools started in June after long-term closures and in August after the shortened summer holidays,” the education ministry’s report said. “More suicides have been caused by mental illnesses.”

The Ministry of Education, Culture, Sports, Science and Technology analyzed the issue based on suicide statistics announced by Ministry of Health, Labor and Welfare. The results were reported at an expert meeting on suicide prevention held on Feb. 15.

Fifty-five suicides were attributable to worries about the future after graduation, while poor academic performances were cited in 52 cases. Those reasons have been behind many suicides in conventional years.

However, more students who took their lives were suffering from depression and other mental illnesses, according to the report.

The education ministry said it will reinforce efforts to publicize SOS dial services, provide consultations and other services, and take other measures to tackle the problem.