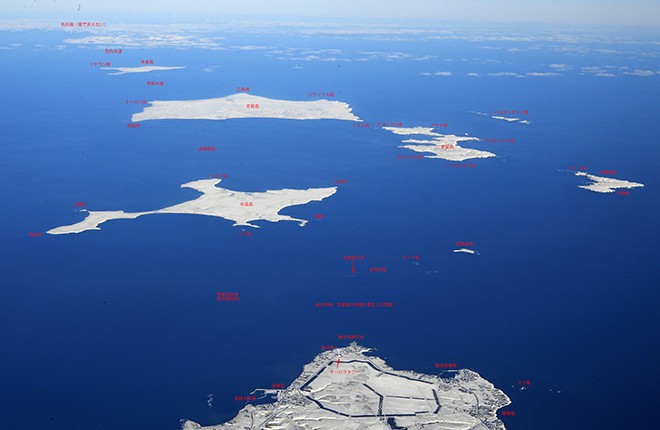 From bottom, the Nemuro Peninsula of Hokkaido, the Habomai islets of the Northern Territories and Shikotan island in 2019 (Asahi Shimbun file photo)

Russian President Vladimir Putin has vowed to follow his country’s revised Constitution that bans the ceding of territory to another nation, indicating he may refuse to even discuss returning the Northern Territories to Japan.

“I am hoping to develop relations with Japan, but I am not going to do anything that would run counter to the Constitution,” Putin said in an interview with local media that was broadcast on Feb. 14.

It is believed to be the first time Putin has publicly given his thoughts about Japan-Russia relations in connection with the Russian Constitution, which was amended in July to prohibit the transfer of territory to a foreign country.

The revised Constitution, however, contains another clause that says border demarcation will be treated as an exception.

Some experts expect negotiations between the two countries over the Northern Territories will be handled as an exception. But Putin has yet to give his opinion on the territorial dispute with Japan in connection with the provision.

In the interview, he stopped short of clarifying his position and told local media to ask Foreign Minister Sergey Lavrov instead.

The four islands off the eastern coast of the main island of Hokkaido were seized by Soviet forces at the end of World War II. The dispute over sovereignty has prevented Tokyo and Moscow from signing a peace treaty to formally end hostilities.

Lavrov has insisted that the four islands are now Russia’s legitimate territory as a result of World War II, and that border demarcation with Japan has been set.

He has also asserted that the territorial issue has not been discussed during talks with Japanese officials.

Lavrov is calling for the signing of a peace treaty that does not touch on the territorial dispute and instead centers on strengthened economic relations.

He is expected to bolster such calls in future negotiations with Japan.

The Japanese government reacted calmly to Putin’s remarks in the interview.

Chief Cabinet Secretary Katsunobu Kato declined to comment on the interview at a Feb. 15 news conference.

But he added that Tokyo is intent on continuing with negotiations with Moscow over the Northern Territories, referring to Prime Minister Yoshihide Suga’s talks with Putin in September.

“We have reaffirmed the agreement (reached under the Abe administration) that the two countries will accelerate negotiations based on the 1956 Joint Declaration,” Kato said.

The declaration stated that the Habomai islets and Shikotan would be first returned to Japan once a peace treaty is signed. That marked a major shift for Japan because it had long insisted that all four islands must be returned.

Some Japanese government officials believe that advancing the territorial issue with Russia is “not high” on the Suga administration’s list of diplomatic priorities.

“Seeing a change in Japan’s approach, Putin may have taken a tougher stand on the Northern Territories,” a senior government official said. “We should be careful to make sure Japan-Russia relations stay on course.”

(This article was written by Ryosuke Ishibashi in Moscow and Tatsuya Sato in Tokyo.)