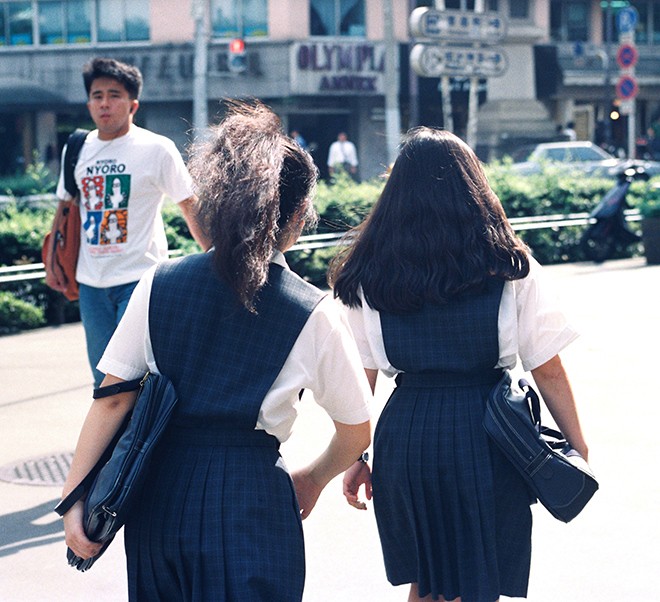 OSAKA--A former Osaka high school student has won her damages lawsuit against the prefectural government after being pressured to dye her hair black because it didn't conform with school regulations.

However, while the court did not find the school regulations illegal, it criticized the actions taken against her.

The Osaka District Court on Feb. 16 found that the prefectural government was responsible for the former student's emotional distress and ordered it to pay her 330,000 yen ($2,840).

The plaintiff, now 21, had entered the Prefectural Kaifukan High School in April 2015.

According to the lawsuit, the school regulations prohibited students from “getting their hair permed, colored, bleached or braided with extensions.”

The female student’s natural hair color is brown. But the school repeatedly told her to dye her hair to make it look blacker based on the regulations.

She was sometimes banned from attending classes and a school trip because “her hair was not dyed black enough,” the lawsuit said.

The student sued the prefectural government in October 2017, seeking about 2.2 million yen in compensation.

In the ruling, the court cited instances in which the school literally made the student's seat unavailable in a classroom and erased her name from a class list when she entered her senior year.

The student protested these actions, but the school continued to punish her for five months. The student could not attend the school until she graduated.

"Such acts depressed the student and built an increasing sense of distrust," the ruling said.

The school "did not consider the psychological toll on the student and its actions lacked serious legitimacy," the ruling said.

One of the main arguments in the trial was whether the school regulations have a legal basis.

The plaintiff said that a hairstyle choice is up to the preference of individuals and that the school regulations violate the right to self-determination guaranteed in the Constitution.

The prefectural government argued that the school regulations have a legitimate educational purpose, since they are intended to restrict gaudy hairstyles and thereby direct students’ interests toward studies and sports and prevent them from committing delinquent acts.

The court sided with the defense on this argument, adhering fundamentally to past judicial rulings that gave wide-ranging discretion to schools regarding school regulations.

The plaintiff also said that the student told the school that her hair color is naturally brown but it rejected her explanation.

It was an excessive action for teachers to tell her to blacken her hair based on the regulations, the plaintiff argued.

The prefectural government argued that a vice principal checked the student’s exposed roots during the school’s “surveying hair” session and confirmed they were black.

So the student’s natural hair color is as black as can be, the prefecture argued.

The court again sided with the defense and found that the school's actions in checking on students' hair color and style are "not illegal."

The teachers "recognized that the female student's natural hair color is black based on reasonable grounds," the ruling said.

The lawsuit shed light on Japan’s rigid school regulations that were depicted as absurd in foreign news media coverage of the lawsuit.