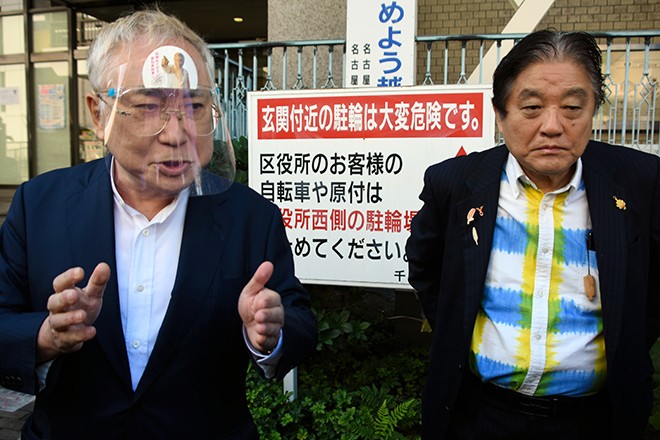 The Aichi prefectural election administration commission filed a criminal complaint with police on Feb. 15 over scores of dubious signatures found on a petition to recall Aichi Governor Hideaki Omura.

At an emergency meeting that day, the commission concluded that it should act against the suspected forgery of massive numbers of signatures, saying the fraud violated the local autonomy law.

Prefectural police accepted the complaint and will launch an investigation into the matter.

“I am hoping that investigative authorities will promptly get to the bottom of the entire incident,” Omura said.

On Feb. 16, two newspapers reported that a contractor with a Nagoya advertising company hired a large number of individuals through a job placement agency to copy the names and addresses of registered voters in Aichi Prefecture and forge their signatures on the petition to recall the governor.

“This is shocking news,” Omura said, reacting to the reports at a news conference that morning. "I cannot believe it. I take it that the reports show organized efforts to commit fraud.”

The election administration commission announced on Feb. 1 that it found 83 percent of 435,000 signatures are invalid because their penmanship showed that they were written by a limited number of people.

Katsuya Takasu, a cosmetic surgeon well known for denying the Holocaust and the Nanking Massacre, led the drive to recall Omura.

But Takasu has denied giving instructions to forge signatures or tacit approval of the fraudulent activities.

Takasu and other recall proponents began the petition drive in August 2020 as they denounced some of the exhibits at “After ‘Freedom of Expression?’” a section of the Aichi Triennale 2019 arts festival held in Nagoya and elsewhere in the prefecture.

Key pieces of contention included a series of burnt images, including one of Emperor Hirohito (1901-1989), and a statue of a girl representing Korean women who were forced to provide sex to wartime Japanese troops.

Omura, chairman of the art festival’s organizing committee, defended the exhibition as freedom of expression.

But Nagoya Mayor Takashi Kawamura, who also served as the committee’s acting chairman, blasted the exhibits as inappropriate for a tax-funded project. He went on to aggressively promote the signature-collection drive.

Omura called on Takasu and Kawamura to be held accountable for the fraud.

Takasu announced the suspension of the signature-collecting campaign in November, citing poor health. The 435,000 signatures submitted to local election administration commissions fell short of the 860,000 required.