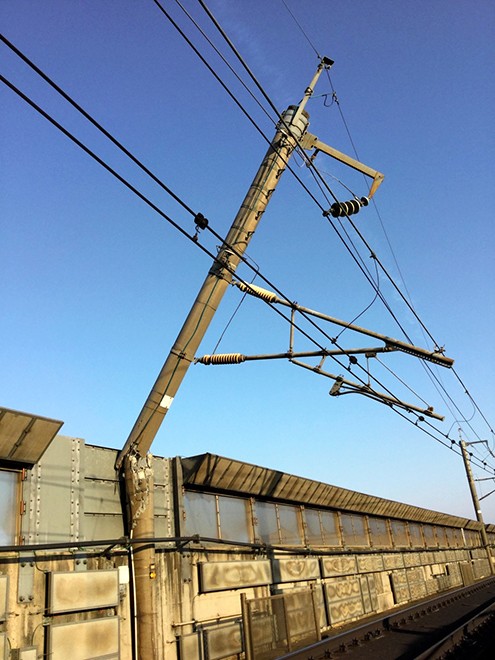 A utility pole in the section between Koriyama and Fukushima stations on the Tohoku Shinkansen Line is seen broken on Feb. 14, a day after a powerful earthquake hit northeastern Japan. (Provided by East Japan Railway Co.)

A government panel has determined that a major earthquake that rocked northeastern Japan on Feb. 13 affected wide areas because of its deep focus, which was much deeper than the 2011 Great East Japan Earthquake.

The panel called for continued vigilance against temblors and tsunami that could follow.

The magnitude-7.3 quake that occurred at 11:07 p.m. on Feb. 13 had its focus deep underground at 55 kilometers, resulting in a far-reaching impact across northeastern Japan.

Naoshi Hirata, chairman of the panel, said that the quake is likely to be an aftershock of the Great East Japan Earthquake, based on the location of the focus.

“Many earthquakes are continuing to occur, compared to levels seen before the Great East Japan Earthquake,” Hirata said. “The Tohoku region along the Pacific coast is prone to earthquakes in the first place. I want the public to remain on the alert against temblors and tsunami for a long period."

The Feb. 13 quake, measuring an intensity of upper 6 on the Japanese scale of 7 in Miyagi and Fukushima prefectures, occurred inside the Pacific plate, which slides under the Japanese archipelago.

Observational data related to the quake was presented at an extraordinary meeting of the government’s Earthquake Research Committee on Feb. 14.

The data showed that some observation points in Minami-Soma, Fukushima Prefecture, shifted approximately 2 centimeters westward and a tsunami of 10 to 20 cm was observed following the earthquake.

The jolt reached far-flung regions without losing its power and registered an intensity of 4 or higher across wide areas from the Tohoku to Kanto regions because the focus was inside the solid tectonic plate, according to the Japan Meteorological Agency and others.

The March 11, 2011, Great East Japan Earthquake, which had a focus at a depth of 24 km, caused massive crustal movements along the seabed, resulting in huge tsunami. But the latest quake had only a little impact on the seabed and triggered only a small tsunami due to a deep focus of 55 km.

The latest quake registered 1,432 gals in Yamamoto, Miyagi Prefecture, exceeding the 1,362 gals recorded in Mashiki, Kumamoto Prefecture, following the main shock in the series of earthquakes that hit the prefecture in 2016.

A gal is a unit of acceleration that measures the extent of an earthquake’s seismic waves.

Unlike the Kumamoto earthquakes, however, the Feb. 13 quake did not cause extensive damage to houses.

“The intensity of long-period ground motions of 1 to 2 seconds was weaker in the latest quake than the Kumamoto earthquakes and the 1995 Great Hanshin Earthquake,” said Takashi Furumura, a professor of seismology at the University of Tokyo’s Earthquake Research Institute.

“But the intense short-period ground motions of less than 1 second were strong this time, so landslides and the collapse of concrete block walls were more likely to occur.”