Disease-repelling charm confirmed as skull of extinct wolf in Aichi 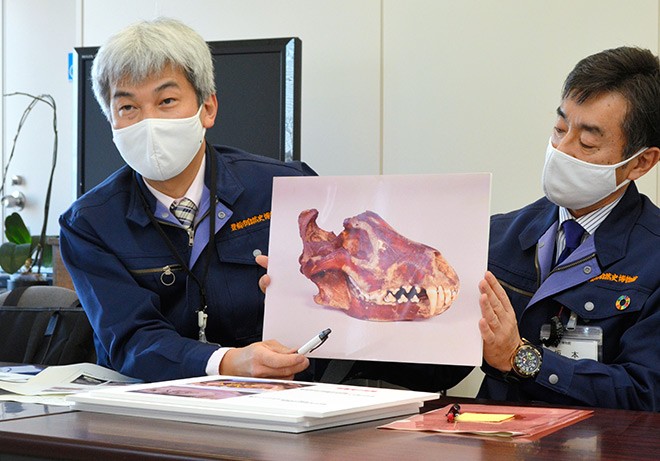 Kensuke Yasui, left, a senior curator at the Toyohashi Museum of Natural History, explains about the donated skull of a Japanese wolf with Hirokazu Sakamoto, the museum’s director, at the Toyohashi city office in Aichi Prefecture. (Hiroto Motoi)

TOYOHASHI, Aichi Prefecture--A canine skull that was used as an amulet to recover from diseases is now recognized as the only specimen of an extinct Japanese wolf in Aichi Prefecture, officials at a museum here said.

A 75-year-old woman from Toyokawa in the prefecture donated the cranium in January to the Toyohashi Museum of Natural History.

“The skull is an important specimen particularly because some skin tissue remains on it,” said Kensuke Yasui, 46, a senior curator at the museum. “We will analyze its DNA and other factors to obtain clues on when the animal is from and how it lived.”

A number of elements led the museum to conclude the skull was from an extinct adult wolf.

The 21-centimeter-long skull has six neuropores in the temporal area, a characteristic of the Japanese wolf. It also does not have an uneven section between the forehead and the nose tip, by which dogs are marked.

In addition, a hollow exists at the central part deep on the upper jaw, an attribute not found in dogs and gray wolves.

The top of the skull is chipped off, likely because the wolf’s brain was collected for use as “kampo” traditional medicine. The sex of the wolf has yet to be determined.

According to the accounts of the donor, the bone was used by generations of her family to pray for recovery from illnesses until around 1950. The specimen was then placed in a wooden box deep on the “tokonoma” alcove at her home.

The box contained a letter of reply from Japanese dog researcher Hirokichi Saito, now deceased, to a request from the donor’s grandfather in 1936 to examine the skull he sent.

The letter says the cranium is likely “from one of Japanese wolves caught in the Mikawa region during the Edo Period.”

According to museum officials, wolves were respected as guardians to protect people from evil during the Edo Period (1603-1867) in Mikawa, the eastern part of present-day Aichi Prefecture.

A prewar research paper says four Japanese wolf skull specimens have been confirmed in the prefecture.

The museum concluded that the donated bone is one of the specimens and derives from a wolf caught in Mikawa during the Edo Period. The remaining three skulls have not been discovered, according to the museum.

Japanese wolves are believed to have died out after the last one was caught in Higashi-Yoshino, Nara Prefecture, in 1905. Three stuffed specimens and about 80 skulls have been confirmed in Japan.

Most head bones of the species are owned by individuals. Only 10 or so skulls are kept by public organizations.

The donated skull is the first specimen of a Japanese wolf kept at a public organization in the Tokai region, which also includes Gifu and Mie prefectures.