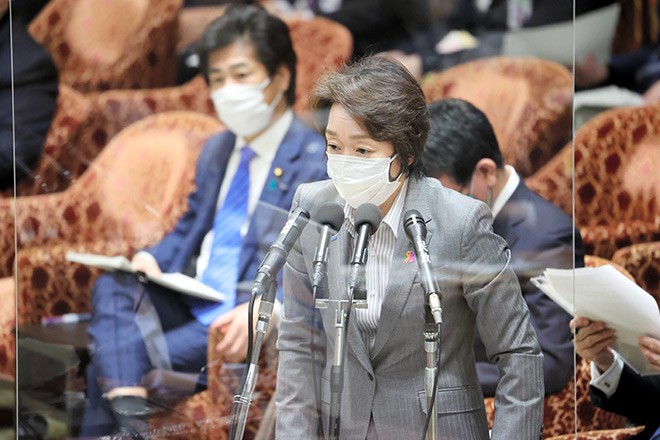 Seiko Hashimoto, the state minister in charge of the Tokyo Olympic and Paralympic Games, responds to a question in the Feb. 17 session of the Lower House Budget Committee. (Kotaro Ebara)

Seiko Hashimoto, a Cabinet member who has participated in both the Winter and Summer Olympics, is now the leading candidate to head the Tokyo Olympic organizing committee, sources said.

Hashimoto, 56, currently serves as state minister of the Tokyo Olympic and Paralympic Games.

A candidate selection committee within the Tokyo Olympic organizing committee held its second meeting on Feb. 17, and sources said a consensus has been developing to name Hashimoto as the successor to Yoshiro Mori, 83, the former prime minister who resigned as committee chief amid international outrage over his sexist remarks.

If Hashimoto does emerge as a candidate, executive board members of the organizing committee would vote possibly by Feb. 19 to officially select her as the next chief.

An Olympic medalist, Hashimoto was the first woman to chair the Sports Committee within the Japanese Olympic Committee. As a lawmaker, she also has close ties with Prime Minister Yoshihide Suga.

At the candidate selection committee’s first session on Feb. 16, agreement was reached on five standards required of the next organizing committee head.

Those were: a detailed understanding of the Olympics, Paralympics and sports in general; a capability to realize the principles of the Olympic Charter and Tokyo Olympics regarding gender equality so that they become a legacy of the Games; international experience and name recognition; an understanding of the preparations made so far for the Tokyo Olympics; and the capability of coordinating among a wide range of relevant officials as well as managing the organizing committee.

Under regulations regarding state ministers, Hashimoto would have to step down if she accepted the organizing committee position.

Mori caused an international uproar when he said that female committee members prolonged meetings because of their competitive need to speak out.

He fueled the criticism when he tried to handpick his successor. That led to various officials calling for a transparent process in selecting a successor.

However, the members of the candidate selection committee have not been made public and the meetings have been held behind closed doors.

The results of the process will be divulged once a new organizing committee head is chosen.