Lawmaker leaves LDP for visiting club during state of emergency 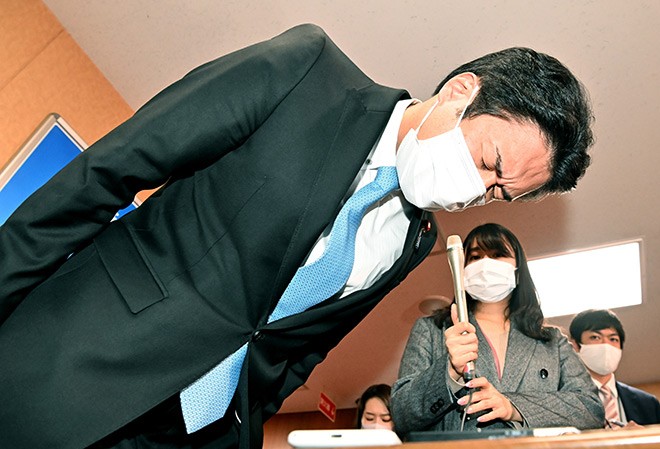 Takaki Shirasuka apologizes to reporters on Feb. 17 at the Tokyo headquarters of the ruling Liberal Democratic Party. (Kotaro Ebara)

It appears that some ruling party lawmakers had a different interpretation of what the word “party” means in the Liberal Democratic Party’s name.

Yet another lawmaker is leaving the LDP amid revelations he visited an upscale club in Tokyo despite that a state of emergency for the novel coronavirus is in place.

According to an online article published by a weekly magazine, Takaki Shirasuka, a Lower House member representing a district in Chiba Prefecture, went to the expensive, members-only club in Tokyo’s high-end Azabu district with a woman on Feb. 10 between about 8 p.m. to 10 p.m.

“I deeply apologize for hurting the feelings of all those who are refraining from going out due to the novel coronavirus,” Shirasuka said, when he met with reporters on Feb. 17.

Governors of the 10 prefectures covered by the state of emergency have asked bars and restaurants in their jurisdictions to shut operations at 8 p.m., and governments have asked people to refrain from nonessential outings.

Shirasuka submitted a request to leave the LDP the same day he publicly apologized, and the party accepted it.

He told reporters he would not immediately resign from his seat, but also indicated he does not plan to run in the next Lower House election that must be held by this autumn.

Shirasuka told reporters an acquaintance of his runs the Azabu club and he went there to help in his own way, by contributing to sales at a difficult time for the bar.

He is currently serving his third Lower House term and had belonged to the LDP faction that at one time also included former prime ministers Shinzo Abe, Junichiro Koizumi and Yoshiro Mori.

Shirasuka once served as parliamentary secretary in the education ministry. In 2019, investigators with the Tokyo District Public Prosecutors Office searched his Chiba Prefecture office. They were looking into bribes distributed by those connected with a Chinese company trying to start casino operations in Japan. Shirasuka was not indicted on any charge.

Three other LDP lawmakers left the party in February after reports surfaced that they had visited bars late at night in Tokyo’s posh Ginza district, even though a state of emergency is in place.

“We seriously accept the criticism and will make efforts to thoroughly enforce discipline,” LDP Secretary-General Toshihiro Nikai said in a statement regarding the controversy.

A lawmaker with junior coalition partner, Komeito, had also visited a club around that same time and resigned his seat as a result.

“We consider this a very regrettable development, and I believe the effect on the administration will be large,” Yuzuru Takeuchi, Komeito’s policy chief, said at a news conference on Feb. 17.

(This article was written by Yuichi Nobira, Junichiro Ishii and Takahiro Okubo.)