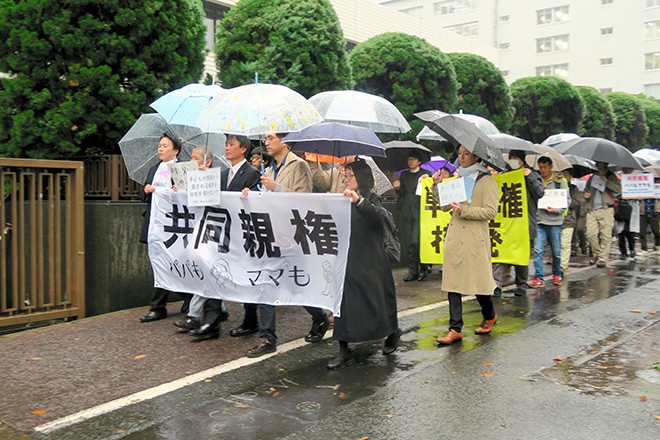 Plaintiffs in a separate lawsuit head to the Tokyo District Court in the capital’s Chiyoda Ward in November 2019 carrying a banner calling for a joint child custody system for divorced couples. (Asahi Shimbun file photo)

A Tokyo court ruled on Feb. 17 that Japan’s single-parent custody system for divorced couples is constitutional, rejecting a challenge by a father who lost custody of his children after divorce.

A man in his 50s who lives in Tokyo sued the state for violating equality under the law guaranteed by the Constitution, seeking 1.65 million yen ($15,600) in damages. The plaintiff argued that he is mentally suffering from losing custody of his two sons following his divorce in 2019.

Unlike most developed countries, Japan has no joint child custody system for divorced couples. The nation’s Civil Law grants full custody of children to one parent after divorce.

In its ruling, the Tokyo District Court stated that a parent-child relationship does not change even if the parent doesn't have custody. The court said the child and the parent can still benefit from developing their personalities by interacting with each other.

The court ruled that the single-parent custody system is reasonable because it takes into account cases where parents do not have good relationships, concluding that the system does not violate the Constitution.

The court also noted that whether to grant divorced couples joint child custody is left to the discretion of the Diet, which has yet to make any decision on the matter.

Justice Minister Yoko Kamikawa on Feb. 10 asked the Legislative Council, an advisory panel to the minister, to start discussing revisions to legal provisions concerning child-rearing after divorce, including joint child custody. But no deadline has been set for reaching a conclusion on the issue.

Many lawsuits involving multiple plaintiffs have been filed at the Tokyo District Court, demanding that the government create systems to grant divorced couples joint child custody and to ensure that non-custodial parents can meet and interact with their children.