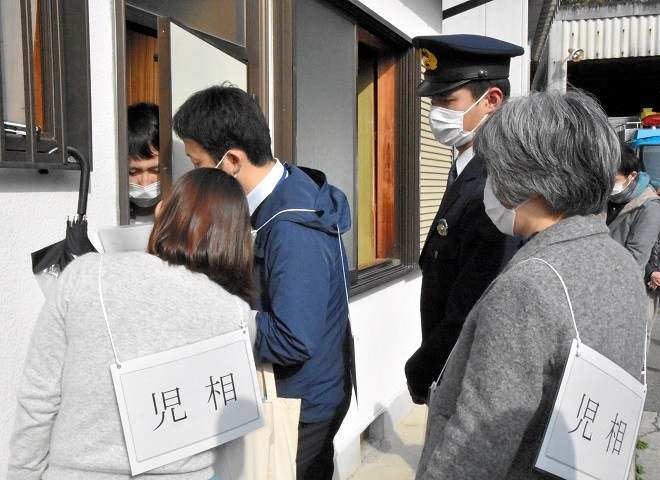 Staff from a child consultation center and police simulate an on-site inspection during a drill on Feb. 7, 2019, in the Kinomoto district of Wakayama. (Asahi Shimbun file photo)

Child abuse cases reported by police to child consultation centers nationwide last year topped 100,000 for the first time, a development the National Police Agency attributed to more aggressive efforts to crack down on the problem.

The milestone was double that of the five years before.

Provisional data released Feb. 4 by the NPA shows that police notified child consultation centers of instances of suspected abuse involving a total of 106,960 youngsters under the age of 18, up 8,738, or 8.9 percent, from the previous year.

Police have been tracking cases of child abuse since 2004.

Information that warrants a police investigation is based on reports and consultations from families, neighbors, medical centers and schools. If reported situations are considered likely linked to cruelty, the cases are forwarded to child consultation centers.

The NPA said the sharp increase was due to greater efforts on the part of police to ensure children are living in a safe environment and to report all possible instances of mistreatment to child consultation establishments.

Of all the notified cases, “mental abuse” constituted the highest number. Such cases involved 78,355 children and accounted for more than 70 percent of all instances of suspected abuse, up 10.8 percent year on year. This category includes parents’ turning violent against their partners or other family members in front of children as well as repeated verbal abuse and being dismissive toward offspring, for example, by paying no attention to them.

Police intervened in a record 2,131 cases involving parents and other adults. The figure was up 159, or 8.1 percent, over the previous year, and more than five times that of 10 years earlier.

Tetsuro Tsuzaki, chairman of the Association for the Prevention of Child Abuse and Neglect, noted that more cases of abuse have been reported by police in recent years because police regard violence before children as a form of psychological abuse that should not be allowed to pass unnoticed.

Tsuzaki also noted that cases may have risen over the past year due to fears of venturing out while the novel coronavirus pandemic rages. He said the health crisis could exacerbate a sense of isolation felt by families, as well as poverty, and mental instability among some parents.

While he said no manifest signs of the pandemic’s effects had surfaced as yet, “instances of mistreatment may simply become latent as children cannot ask for help by themselves.”

Other data released by the NPA found that fewer criminal offenses were committed last year. The total figure of 614,303 cases was down 17.9 percent year on year for a new low since the end of World War II for the sixth year in a row.

Muggings, bag snatchings and other street crimes dropped significantly by 27.0 percent to 199,282. The NPA put that down partly to people going out less frequently because of the pandemic.