The longest-kept mandarin dogfish in a Japanese facility swims gracefully at the Toba Aquarium in Toba, Mie Prefecture. The deep-sea shark, maintained in 12-degree temperature water, entered the aquarium in December 1990, the same time Naoto Takamura, a division chief in the care and research department, joined the facility. (Takunori Yasuda) 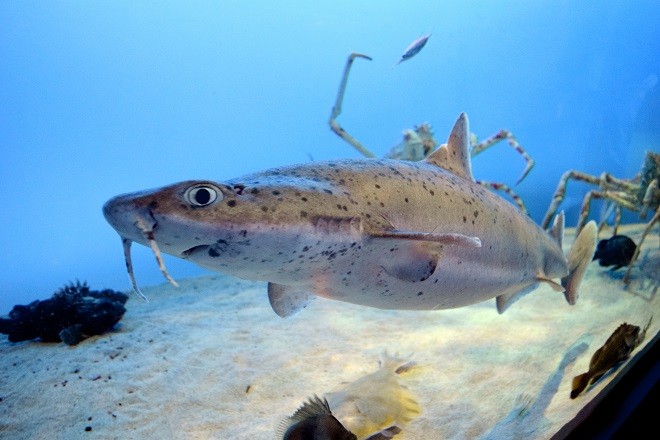 With its two characteristic whisker-like front nasal valves, a mandarin dogfish swims in the same tank as the Japanese spider crab in the Toba Aquarium. (Takunori Yasuda)

TOBA, Mie Prefecture—A rare deep-sea shark continues to set longevity records in captivity but appears more than willing to give up the spotlight to other creatures at the Toba Aquarium here.

The shark, a mandarin dogfish, may not epitomize the ferocious image of great whites and bull sharks that can feed on humans. In fact, the dogfish at the Toba Aquarium doesn’t even attack the other critters in its surroundings, including a Japanese spider crab, the “star” of the gloomy tank.

For 30 years, the modest shark has silently and gracefully broken records for the oldest mandarin dogfish being kept in Japan.

The dogfish began its life at the Toba Aquarium in December 1990. The seawater tank’s temperature is kept as cold as 12 degrees to resemble the creature’s abyssal environment.

Naoto Takamura, 53, a division chief in the aquarium’s care and research department, is responsible for looking after the mandarin dogfish and other marine creatures.

He said he feels relaxed when he feeds the shark.

A long rod with skewers of filleted horse mackerel and sliced squid is stuck out near the mouth of the mandarin dogfish. The fish swims slowly and elegantly toward the food.

“When the food goes to its mouth with pinpoint accuracy, it eats as if sucking it in,” Takamura said.

The 1-meter-long mandarin dogfish eats only three times a week. And it takes in only several dozen grams of food at one time.

“At times, it doesn’t even turn to the food, meaning it is an excessively light eater,” Takamura said.

The shark widely inhabits the Pacific Ocean but is rarely caught because the species stays on slopes on continental shelves as well as deep seafloors 100 meters or more below the surface.

Only five mandarin dogfish are kept at four facilities nationwide, including the Toba Aquarium. Details on how long they live have yet to be determined.

Although mandarin dogfish are found and relocated to tanks, they could die within a week or so.

It is unknown why the shark at the Toba Aquarium is the only one in Japan to live for more than 30 years in captivity.

“The shark was caught by a long-liner off Shima in Mie Prefecture and brought to the aquarium in good condition without damage to its body,” Takamura said. “Also significant is that it has well adapted to the captive environment.”

Despite its rarity, the mandarin dogfish does not receive an enthusiastic response from visitors.

“Children appear to be more interested in the flashy appearance of the Japanese spider crab, so few of them cheer wildly at the mandarin dogfish, much to my dismay,” Takamura said.

Takamura joined the Toba Aquarium in 1990 simultaneously with the mandarin dogfish.

He said he wants his “colleague from the same year” to keep living until he reaches the facility’s retirement age of 65.

Takamura, in fact, is rather against having the shark become as nationally popular as the dugong and giant isopod at the Toba Aquarium.

“Drawing so much attention might result in a higher stress level and deteriorated health condition,” he said. “I would like people to pay attention to it but hope at the same time that it will continue to quietly enjoy a long life as it has until now without becoming so high-profile.”