Suga has long way to go to meet U.S. base pledge to Okinawans 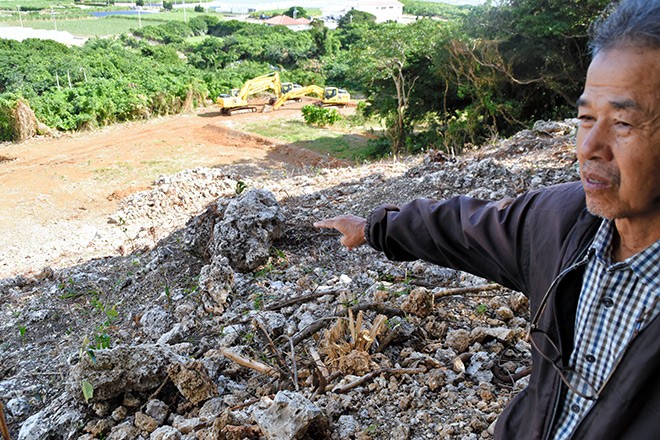 Takamatsu Gushiken, who has been involved in recovering the remains of the war dead, points to cleared land where they may have been buried in Itoman, Okinawa Prefecture, on Nov. 26. (Asahi Shimbun file photo)

His pet phrase on file has been that he would be considerate of residents’ feelings.

Still, the administration of Prime Minister Shinzo Abe, which Suga underpinned as the most senior government spokesman, pushed for the relocation of U.S. Marine Corps Air Station Futenma within the prefecture--even though Okinawans have adamantly opposed the central government’s project.

As prime minister, Suga continues to repeat the phrase. But critics contend he is not following through on his vow with concrete action.

The relocation of the Futenma airfield in Ginowan to the Henoko district of Nago, both in the prefecture, is an issue that has sharply divided the central government and the southernmost prefecture.

Okinawans have repeatedly asserted their opposition to the project through electing Diet members and local leaders. A referendum in February two years ago showed 70 percent of voters were against the project to build a new U.S. base to take over Futenma’s functions.

Islanders view the Futenma base as a danger to locals due to its location in the middle of the residential area of Ginowan. But they are opposed to the relocation of the Futenma facility within the island prefecture. Okinawa is home to about 70 percent of the U.S. bases in Japan.

The central government, based on an agreement with the U.S. government, is pushing to relocate the Futenma airfield to a new facility to be constructed on a landfill off Henoko.

But a government plan to secure soil from the southern part of Okinawa’s main island for the reclamation work is setting off new political clashes.

Securing the enormous amount of soil required to fill in the landfill has become a major headache for the government.

The Defense Ministry first mentioned it was considering it last April.

That triggered a strong backlash from Okinawans, as many remains of the war dead are believed to be still buried in the southern area--the site of the bloody 1945 Battle of Okinawa.

Seiken Akamine, a Japanese Communist Party lawmaker, blasted the plan to use dirt from the former battlefield and demanded it be ruled out as an option.

“Using dirt mixed with the remains of the war dead to build a U.S. military base is absolutely out of the question,” Akamine, who represents an Okinawa constituency, said at a Feb. 17 Lower House Budget Committee meeting.

He said Suga’s Liberal Democratic Party used to have good sense about what lines not to cross, no matter how desperate the party is.

It was a reference to former Prime Minister Keizo Obuchi, who helped efforts to recover the remains of the war dead there.
Suga replied that gathering soil on the island’s southern area has yet to be decided on.

“Even if that plan is finalized, I will call for special attention to prevent remains from being used for reclamation work,” he said.

Among the most serious of the problems plaguing the project is the recent discovery of a breadth of weak seabed in waters off Henoko that reportedly has the consistency of “mayonnaise.”

The finding contributed to a massive jump in the estimated cost for the entire project due to additional work needed to strengthen the seafloor. The estimate has ballooned by 2.7 times the size of the original, to about 930 billion yen ($8.78 billion).

The central government acknowledged the existence of the weak seabed only after landfill work began there in December 2018, although it became aware of it from a 2014-2016 study.

The delays to the work have made certain that returning land from the Futenma airfield to Okinawa Prefecture will be pushed back to the middle of the 2030s or even later. It was initially announced to be done around fiscal 2022 or later.

The soft seabed raises a big question about the Henoko project, which is whether it is technically possible to reclaim soft seabed in Oura Bay.

Both politicians and construction businesses in Okinawa are increasingly casting doubts about the feasibility of the reclamation work, regardless of their position on relocating Futenma to Henoko.

At a Feb. 5 meeting of the Lower House Budget Committee, Tomohiro Yara, a legislator of the main opposition Constitutional Democratic Party of Japan, pointed out that the U.S. side is also raising concerns about the landfill work.

Yara, who represents an Okinawan electoral district, was referring to the U.S. House Armed Services Committee’s Readiness Subcommittee. In June last year, the subcommittee directed the defense secretary to submit a report on measures to strengthen the seabed and outline the dangers of earthquakes at the planned construction site off Henoko.

Although the reference to potential problems of the relocation to Henoko was subsequently deleted from the committee's report, Yara said the U.S. Congress shares concerns about the reclamation work.

He pressed Suga over whether he will stick to the relocation project, suggesting it could prove unachievable and end up undermining Japan-U.S. relations.

“You are the only one who can end the project, which is uncertain to ever be completed despite a huge injection of taxpayer money,” he said.

Suga did not mince words in his reply.

“Relocating to Henoko is the only solution to the Futenma issue,” he said. “The U.S. side understands it.”

The government takes credit for the relocation of 15 KC-130 midair refueling aircraft from the Futenma base to U.S. Marine Corps Air Station Iwakuni in Yamaguchi Prefecture as reducing Okinawa’s U.S. base burden.

The relocation was completed by August 2014.

“As the frequency of flights to and from the Futenma base has been cut significantly, the impact on residents has lessened,” he said at the Feb. 5 Lower House Budget Committee meeting.

But Yara, a former journalist with the local daily Okinawa Times, pointed out that the midair refueling aircraft were returning to Okinawa for training.

A study by the Defense Ministry’s Okinawa Defense Bureau showed that the frequency of flights at the base by fixed wing aircraft not currently deployed at Futenma have been skyrocketing. Aircraft flights to and from the Futenma airfield, including KC-130 tanker planes, surged to 2,678 in fiscal 2019 from 236 in fiscal 2017.

The roar of fixed wing aircraft is also a major source of noise pollution. The Ginowan city government has repeatedly filed grievances over the noise with the bureau, pressing for a solution to the problem.

Other issues stemming from U.S. military activity there also continue to rankle residents.

Since the beginning of this year, 12 incidents involving U.S. military personnel--including sexual assault--have been reported.

Islanders are also complaining about a recent series of low-altitude flights by U.S. military aircraft outside training areas.