Spending tanks on domestic trips in 2020, sliding more than 50% 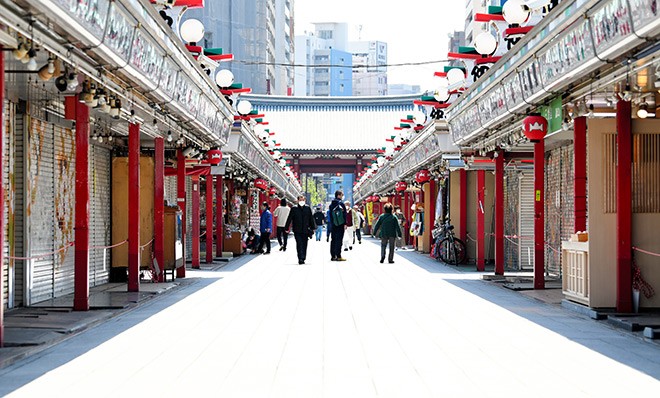 Many shops are closed and few people are out along a shopping street in Tokyo’s Asakusa district during Japan's first state of emergency on April 15. (Asahi Shimbun file photo)

The Japan Tourism Agency announced the figures on Feb. 17, the lowest logged since 2010 when the current system for surveying them was adopted.

Japanese spent 18.4 trillion yen traveling at home in 2014, driven by the impact of the consumption tax hike. In 2019, domestic travel spending hit a record-high 21.9 trillion yen.

But it tanked in 2020 due to declining demand for travel amid the pandemic.

Expenditures per person for a single trip, including meals and shopping, fell by 9.2 percent from 2019 to 33,925 yen.

The decline was apparently attributable to the drop in spending on public transportation as many people traveled by car to areas close to home.

But during the October-December quarter, it fell just by 46.5 percent year on year to 2.6 trillion yen. For that quarter, the government subsidized its Go To Travel program, which expanded nationwide, leading spending to rebound to a certain level.

Cheaper accommodation prices at hotels offered through Go To discounts may also have contributed to the lower level of domestic travel spending in 2020.