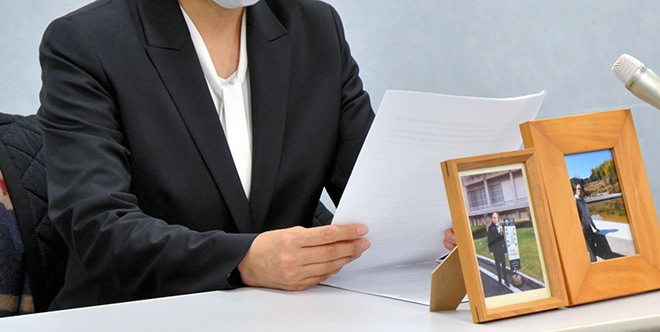 OSAKA--The widow of a Finance Ministry employee has sought a court order for the government to disclose a file that could reveal the circumstances behind his suicide and the pressure he felt to falsify documents.

“The submission of the file as evidence (in court) meets his wishes,” Masako Akagi said on Feb. 17 during the third session of oral arguments in her lawsuit at the Osaka District Court.

She testified that she heard from her husband, Toshio, that he wrote down in the file every criminal act he committed. The government has provided little explanation about the file, and even threw doubt on its existence.

Masako, 49, sued the central government, arguing that its orders to Toshio to falsify the documents led to his suicide.

The doctored papers were related to negotiations and the heavily discounted sale of state-owned land in Osaka Prefecture to Moritomo Gakuen, an educational institution that had close ties to Akie Abe, wife of former Prime Minister Shinzo Abe.

Toshio, 54, who worked at the Kinki Local Finance Bureau, committed suicide after suffering from depression because of the pressure to dampen speculation that the discount was connected to Akie, according to the lawsuit.

On Feb. 8, Masako filed a request with the district court that it order the central government to release the so-called Akagi file created by her husband that could shed light on how and why the documents were falsified.

Masako criticized the government’s reluctance in offering an explanation.

“I can hardly understand why the government doesn’t even reveal whether the file exists or not,” she said at a news conference after the third oral arguments.

The government side expressed its intention to again respond to inquiries about the file by May, according to lawyers representing the plaintiff.

(This article was written by Takashi Endo and Yuto Yoneda.)