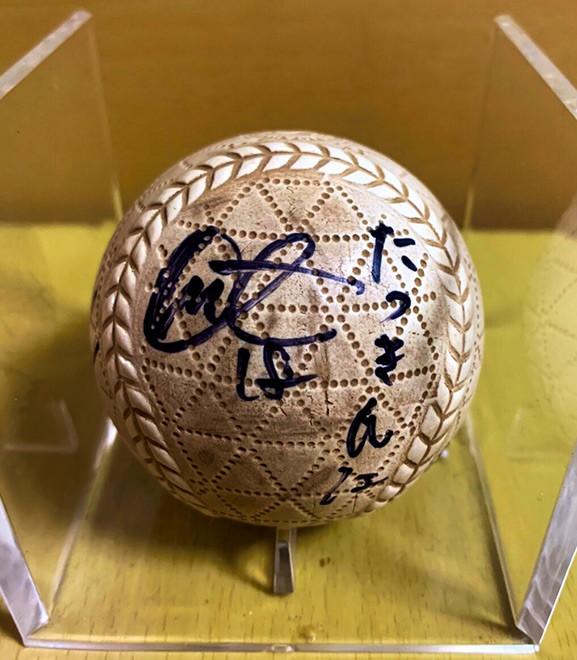 The return of pitcher Masahiro Tanaka has raised hopes in Miyagi Prefecture that the Rakuten Eagles will again rise to glory. But for one young survivor of the 2011 tsunami disaster, an earlier encounter with “Ma-kun” proved more valuable than any baseball championship.

Tatsuki Sakamoto still keeps a dirt-stained baseball from the event that helped to bring him out of despair and erase feelings of survivor guilt.

He was a 12-year-old sixth-grader at Omagari Elementary School in Higashi-Matsushima, Miyagi Prefecture, when the Great East Japan Earthquake struck off the coast on March 11, 2011.

Sakamoto was at the school preparing for the graduation ceremony when the strong shaking sparked panic in the classroom. He returned home and joined his family members, but the entrance was such a cluttered mess that they could not go inside.

Sakamoto heard a neighbor shout, “A tsunami is coming.” He saw a rushing black wave of water approaching from 200 meters over a seaside road.

The family headed toward the school. His father was caught in the wave near the school gate but managed to crawl out of the water, and they escaped into a classroom on the third floor.

For about a month, the family took shelter at the school, which had been turned into an evacuation center. About one week into his evacuation life, Sakamoto learned that three of his classmates were dead.

“I couldn’t think about my future at all,” he recalled.

The following April, Sakamoto visited his home and found the first floor of the two-story house had been inundated, and an unfamiliar car was stuck deep in a wall. The interior was covered with sludge, and the toilet was overflowing.

Around that time, Sakamoto learned that the Rakuten Eagles, based in the Miyagi prefectural capital of Sendai, would visit the school evacuation center.

A member of a local baseball club, the boy was a fan of the professional baseball team. But he thought that only retired players would visit such a rural neighborhood.

Still, Sakamoto wanted an autograph from someone, even if he wasn’t an active player. He pushed aside the wreckage at his home to find a mud-covered baseball.

On April 8 that year, a van bearing the logo of the Rakuten Eagles entered the school ground. The door opened, and out walked Tanaka, Motohiro Shima and other leading players.

The excited children played catch, tag and other games with the ballplayers, who also gave their autographs.

As Sakamoto held out the ball to Tanaka, he was surprised by the enormous size of the pitcher’s palm.

“What’s your name? I’ll put it down,” Tanaka told the boy who was wearing his baseball team’s jacket ever since his evacuation life began.

Tanaka asked, “Are you playing baseball,” and Sakamoto said, “Yes.”

Tanaka signed the ball and posed for a picture with Sakamoto.

Soon afterward, Sakamoto and his family returned home to live on the second floor. Sakamoto moved on to junior high school.

“I was a child, but I thought it wasn’t the time for me to play baseball,” he recalled. “But thanks to Tanaka’s words, I thought I could do my favorite thing again.”

Encouraged by his parents, Sakamoto devoted himself to baseball. He often traveled to Sendai, the prefectural capital, to watch the Eagles’ home games.

After graduating from high school, he studied at Doshisha University in Kyoto. In the summer of his junior year, he joined an intern program organized by the Reconstruction Agency to assist companies and organizations in disaster-affected areas.

Sakamoto worked at a fishery product processing company in Ishinomaki, Miyagi Prefecture, for one month to develop new businesses.

Now 22, Sakamoto said his unexpected meeting with Tanaka was a “turning point” in his life.

“When the Rakuten players came that day, cheers erupted at the evacuation center,” he said. “The power to move forward comes from happiness, and the Omagari district was given an incredible power.”

Sakamoto said there was a time when he questioned whether he deserved to be alive, saying that he wasn’t sure he could enjoy life after surviving the tsunami while others died.

But as time passed, his nightmares about the tsunami came less frequently and he started looking forward to leading a fulfilling life.

Disturbed that the meltdowns at the Fukushima No. 1 nuclear power plant exacerbated the disaster and hampered recovery, Sakamoto decided to join a company whose operations include a new energy business.

In late January this year, Tanaka announced he would return to the Rakuten Eagles after seven seasons of starring for the New York Yankees.

“I was really surprised,” Sakamoto said. “I was glad that he still loves the Tohoku region and Miyagi Prefecture. I was given strength from Tanaka. I want to be someone who can give hope to others in any way I can.”