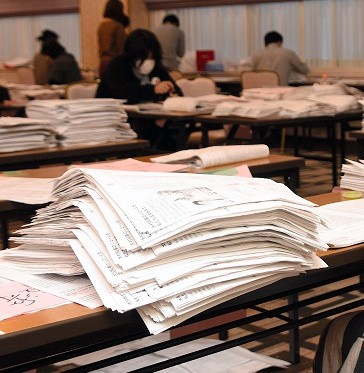 An official at an advertising company in Nagoya admitted the firm was asked to hire workers to ghostwrite scores of signatures for a governor recall petition by an official from the campaign, sources said.

Nearly 100 part-timers hired by the company spent about 10 days in October 2020 copying the names of eligible voters from the voter registry onto the petition to recall Aichi Governor Hideaki Omura, the sources said.

The company had received an order from the recall campaign official to the tune of several million yen to produce the signatures, according to sources. The company submitted the form to Aichi prefectural police this month, the sources said.

The recall campaign official, however, calls these allegations groundless.

The recall effort was plunged into scandal in recent months after suspicions were raised that a massive number of the signatures collected are forgeries, and many may end up being tossed out as a result.

Under the Local Autonomy Law, forging a signature is punishable by imprisonment of up to three years or a fine of not more than 500,000 yen ($4,730).

Katsuya Takasu, a cosmetic surgeon well known for denying the Holocaust and the Nanking Massacre, launched the drive to recall Omura in June 2020.

According to sources, the ad company offered to assist the campaign. A subcontractor then delivered a large number of postcards calling for a recall of the prefecture’s governor.

A person related to the company said the campaign official asked the ad firm to secure part-time staff to ghostwrite signatures.

The order form, addressed to the company, was made under the official’s name.

The company then put a call out for the part-time workers through the subcontractor and others.

The part-timers transferred the massive list of names--10 cardboard boxes worth--to the petition in October at a facility in Saga, spending about 10 days.

A person related to the recall campaign was also present.

“The campaign office never ordered it, nor did it request it,” he said at a Feb. 16 news conference.

But Tanaka said the recall campaign office has confirmed some of the signatures on the petition were “made in the Kyushu region.”

Several volunteers involved with the recall campaign held a news conference in December and said they noted many illegitimate signatures.

The Aichi prefectural election administration commission said about 83 percent of the roughly 435,000 submitted signatures are suspected to be invalid.

The commission filed a criminal complaint with the prefectural police on Feb. 15, alleging a violation of the Local Autonomy Law.

Nagoya Mayor Takashi Kawamura, who has aggressively promoted the signature-collecting drive, also filed a criminal complaint with police on Feb. 17.

Kawamura said he “will find out what the truth is.”

(This article was written by Yuri Murakami and Makiko Komatsu.)