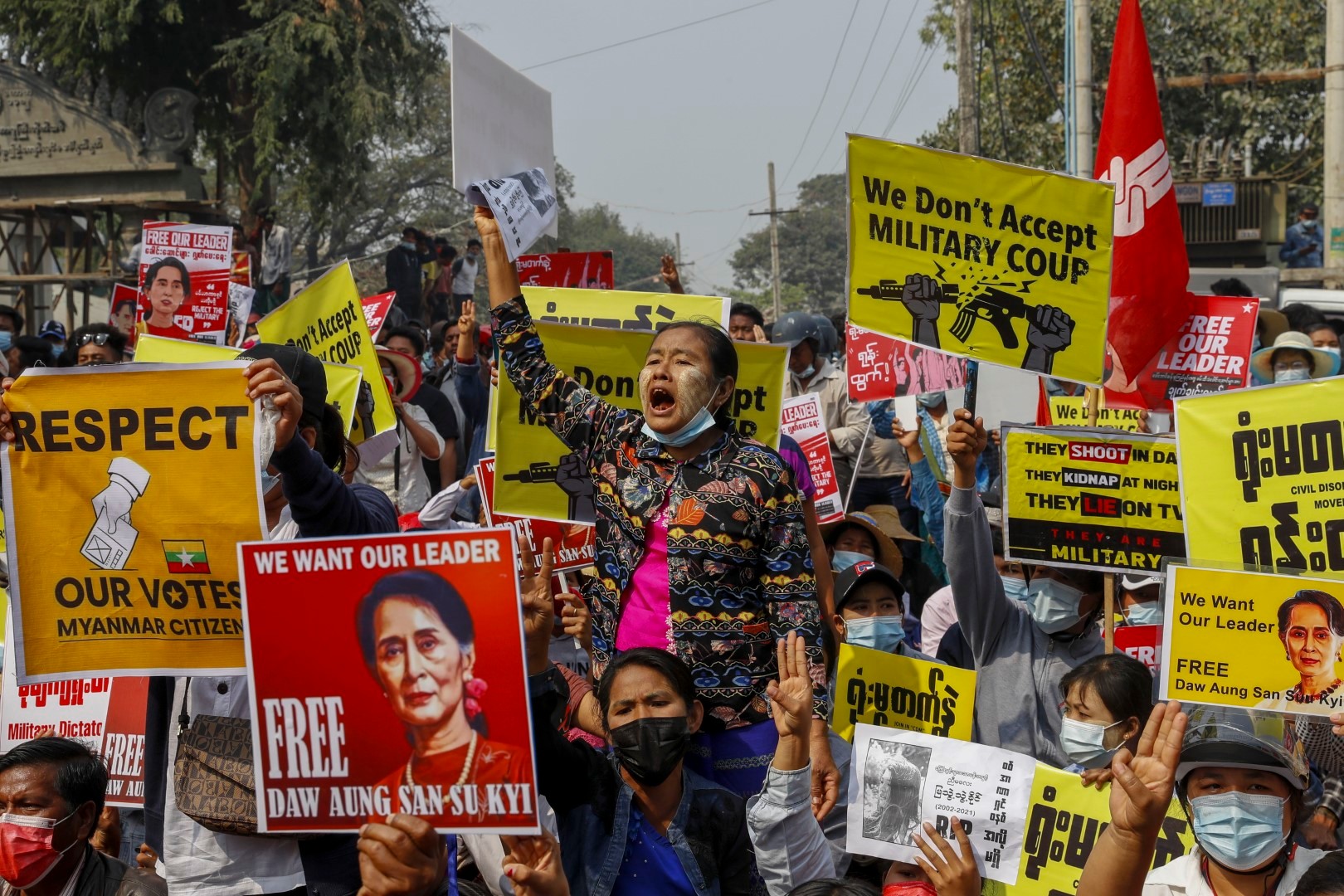 YANGON, Myanmar--State railway workers in Myanmar continued to strike Thursday despite a police rampage the previous night targeting them in a sign of the military junta’s concern over growing civil disobedience by public workers protesting the coup.

Three-quarters of the country’s civil servants are on strike, all private banks are closed and the protests have weakened the economy significantly, said Tom Andrews, the independent U.N. human rights expert on Myanmar.

Andrews said the protesters have weakened the economy significantly and are looking for the international community to act.

The most important thing the international community can do now “is focused, targeted, tough economic sanctions and diplomatic pressure,” he said in an interview from Virginia, where he lives.

Aggressive actions by security forces Wednesday night in a Mandalay city neighborhood where state railway workers are housed reflected the increased focus of the protests on businesses and government institutions that sustain the economy.

The railway strike has received support from ordinary citizens who have placed themselves on railroad tracks to stop trains that the military has commandeered.

Efforts by Mandalay residents to block a rail line on Wednesday apparently triggered retaliation that night.

Less than an hour after Wednesday’s 8 p.m. curfew started, gunshots were heard as more than two dozen men in police uniforms with shields and helmets marched past railway workers’ housing. Numerous videos posted on social media showed muzzle flashes as shots were heard, and some police shot slingshots and threw rocks at the buildings. Marching chants of “left, right, left, right” could be heard along with shouts of “shoot, shoot.”

A labor activist said many people believe the disobedience movement is an effective way of bringing down the junta, and that is why it has attracted support from government workers in the health, education and transport sectors, as well as private workers such as bank employees and engineers.

Factory workers joined the initial protest marches but their financial circumstances keep them from taking part every day, he said on condition of anonymity to protect his own safety.

The junta has said it took over--after detaining Suu Kyi and other leaders and preventing Parliament from convening--because elections last November were tainted by voting irregularities. The election outcome, which Suu Kyi’s party won by a landslide, was affirmed by an election commission that has since been replaced by the military. The junta says it will hold new elections in a year’s time.

The U.S. government has imposed new sanctions on Myanmar because of the coup, and other governments and the United Nations have called for Suu Kyi’s administration to be restored.

Opponents of the coup are urging foreign businesses to cut ties to Myanmar that benefit the military regime. A few, such as Japan’s Kirin beer, which has been under pressure for years to break its partnership with a military-linked company, have agreed to do so.

Extractive industries, such as gas and oil drilling and jade mining, are key sources of foreign revenue for Myanmar. Rights campaigners have appealed to foreign companies involved in those industries to stop paying revenue to the new military government.

The Myanmar Alliance for Transparency and Accountability, a national civil society network, said any payments undermine “the Myanmar people’s efforts to return the country to democracy” and will give the military resources to violate human rights.

About 200 people protested Thursday near Kanbauk, in the south, outside facilities for a major pipeline that pumps gas from offshore fields for export. The demonstrators moved between the premises of Total of France, PTTEP of Thailand and Petronas of Malaysia to press their demands and later joined with a larger anti-coup demonstration in Kanbauk.

Andrews, the U.N. expert, said economic sanctions and diplomatic pressure have a good chance of working.

“I have confidence that there is great potential with those steps, by virtue of the fact that they have been successful in the past,” he said.

Large marches were held Thursday in Myanmar’s main cities. In Yangon, some protesters tried to hinder security forces by abandoning cars in the middle of the road, as they did Wednesday. But small groups of men, including some dressed in Buddhist monks’ robes, attacked several drivers and their vehicles, smashing windshields.

In the capital, Natpyitaw, water cannons were employed against demonstrators, and police forcibly arrested protesters in Myitkyina, the capital of the northern state of Kachin.

On Wednesday night, the military ordered an internet blackout for a fourth night in a row, almost entirely blocking online access from 1 a.m. to 9 a.m.

While the military has not said why the internet is being blocked, there is widespread speculation that the government is installing a firewall to allow it to monitor and block online activity.

The coup was a major setback to Myanmar’s transition to democracy after 50 years of army rule that began with a 1962 coup. International sanctions helped Suu Kyi come to power after her National League for Democracy party won a 2015 election, but a constitution adopted under a military regime retained substantial powers for the generals.