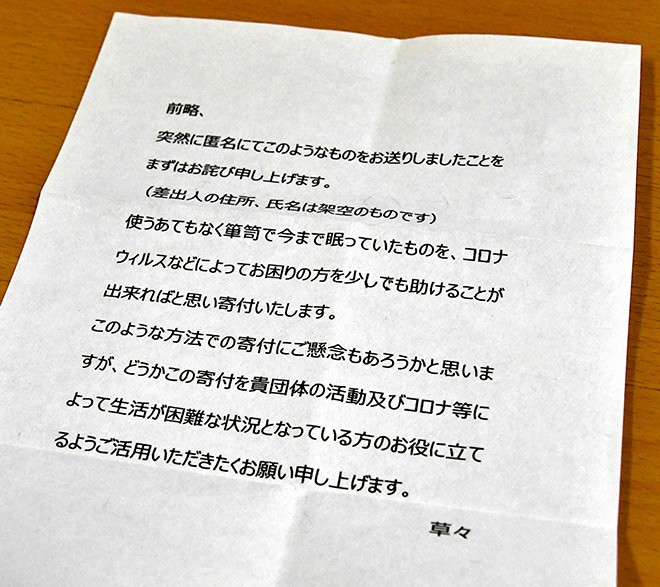 A good Samaritan is lifting spirits around Japan with anonymous donations of 4 million yen ($38,000) in cash to nonprofit organizations trying to help vulnerable people struggling to survive while the novel coronavirus pandemic rages.

The first reported instance of the individual's largesse occurred Feb. 15 when a printed letter stuffed with cash arrived at the office of Asia Pacific Alliance for Disaster Management Japan (A-PAD Japan) in Saga city on the main southern island of Kyushu.

The letter said in part, “I hope this can be of some help to those people facing problems due to the novel coronavirus.”

Other organizations around Japan also said they had received similar gifts after The Asahi Shimbun ran a story on the donation in its Feb. 19 edition.

For example, the Tokyo office of Musubie, an organization that provides support to groups around Japan operating cafeterias that often provide free meals for children, said it received a similar letter and 4 million yen on Feb. 2.

After consulting with their lawyer, organization officials reported the matter to the police, but the money was returned after police concluded there was no connection to a possible crime.

“We were very surprised, but also very grateful,” said a representative of the organization. “We will make effective use of the money.”

The letter starts off, “I wish first to apologize for sending such a letter without notice and anonymously.”

The writer explained the money had been lying in a chest of drawers at home with no plans to spend it on anything.

“I would like to donate this so that it can help even just a little those people facing problems due to the novel coronavirus,” the letter continues. “You may feel suspicions about a donation given in this manner, but I ask that you use this money for your organization’s activities and to help those in difficult straits due to the pandemic.”

A similar letter and the same amount of cash was received on Feb. 1 by the Tokyo-based nonprofit organization Good Neighbors Japan, which supports educational efforts in Asia and Africa as well as single-parent families in Japan.

Two days later, the organization posted a photo of the letter received as well as a message on its Facebook account. The message said, “To the individual who sent us this letter and the large amount of cash. The Good Neighbors Japan secretariat received it the day before yesterday. Since there was no other way for us to express our appreciation, please excuse us for taking this course. Thank you very much. We will use the money in support activities for those troubled by the novel coronavirus.”

A number of other nonprofit organizations have also reported similar anonymous gifts.