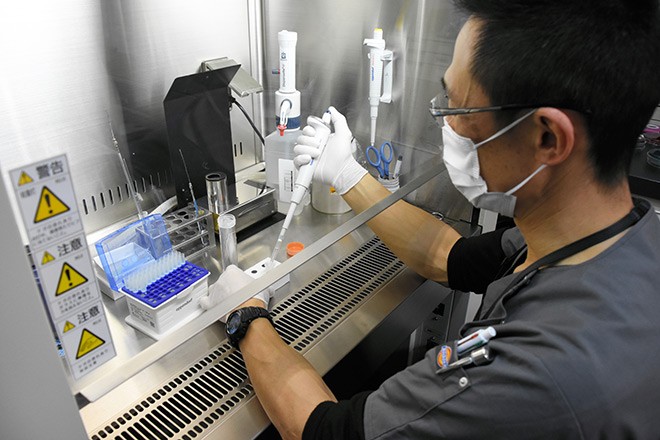 Testing for COVID-19 could soon face serious difficulties in Japan due to a shortage of materials driven by rising global demand.

This is because half of the materials used in polymerase chain reaction (PCR) tests to detect the presence of a virus are imported, an industry official noted.

With stocks running low, this is affecting the ability of testing facilities and university labs.

The quantity of imported materials circulating in the Japanese market has significantly decreased since around November, in part because foreign manufacturers prioritize supply to their home countries, the official said.

“Many countries are competing for materials to carry out PCR tests,” said a sales representative with a leading domestic wholesaler. “The difficulty in securing adequate supplies could continue for at least the rest of this year.”

An employee with a private-sector testing facility in eastern Japan cautioned that “in the worst-case scenario, we will become unable to perform tests if a shortage in supplies continued.”

“We have asked several wholesalers to procure whatever is available now, which is forcing us to use alternative items even if their quality is not particularly good,” the employee added.

The shortfall is particularly acute with regard to supplies of plastic pipette tips, which store nasal swabs, saliva and other samples; PCR tubes, which contain samples and are placed into a thermal cycler for analysis; and nitrile gloves, which make it easier to do detailed work.

As they are all disposable products, test centers and research labs require a huge amount of them.

The accuracy of test results could be compromised if the items are not of the highest quality and sterilized, according to experts.

Last month, the Japanese arm of Corning Inc., a leading U.S. maker of those products, notified Japanese wholesalers that they faced up to a four-month delay in delivery due to surging global demand.

The number of domestic manufacturers of PCR test materials is not sufficient to make up for the sharp shortfall.

A leading Japanese manufacturer said it could not catch up with production as orders have jumped five-fold or so since late last year, compared with an ordinary year.

The maker was temporarily forced to stop accepting all orders after its sterilization equipment broke down in late January.

Investing in additional equipment to bolster output may not be financially viable, given that demand is expected to fall rapidly once the coronavirus pandemic is contained, it added.

Getting hold of high-quality PCR tubes has become difficult since late last year, according to a researcher in biology-related science at a university in a local region.

“We will not be able to conduct PCR tests after we use up our remaining two boxes of PCR tubes,” the researcher said. “Continuing with our study could become impossible by this spring.”

(This article was written by Aya Amano, Ryoma Komiyama and Ichiro Matsuo.)