VOX POPULI: Our brains are paying the price for addiction to smartphones 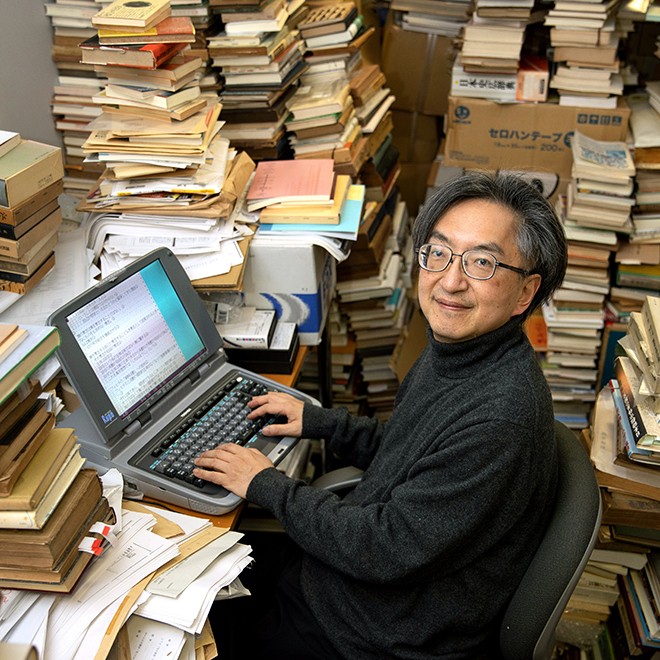 Music critic Morihide Katayama works with a Rupo word processor, one of his collection of seven, in Yokohama in December. (Asahi Shimbun file photo)

For people aged 50 or older, the product names Shoin, Bungo and Rupo will likely ring a bell, awakening memories of word processors.

I thought those dedicated word processing machines were a thing of the past, a relic from the pre-personal computer era. It therefore surprised me to learn that music critic Morihide Katayama is still using Toshiba Corp.’s Rupo.

Katayama has been using the word processor for 35 years, according to an article published in The Asahi Shimbun’s “be” section last month. Before its production was terminated, he rushed to buy three used Rupos to add to his stockpile.

Old models don’t allow internet browsing, and Katayama said that is helpful for focusing on writing.

Impressed by the fact that his insightful writings have been produced with such machines, I picked up “Sumaho No” (Smartphone brain), a book creating a lot of buzz.

The book, a Japanese translation of “Skaermhjaernan” (Screen brain) written by Swedish psychiatrist Anders Hansen, examines humans throughout history to describe how digital gadgets have robbed us of concentration.

Since the birth of mankind some 200,000 years ago, the human brain has evolved to make quicker responses to things that appear by diversifying its concentration. Our brains have been programmed, for example, to detect a lion nearby or other risks as quickly as possible.

This habit, inherited from our ancestors, has been amplified by smartphones, according to the author. We constantly check our smartphones to find out whether we have received new emails or whether our social media posts have received “likes.”

There have been some notable news stories about smartphones, with wireless carriers offering lower fees for more data usage.

While more competition among companies is welcome, cuts in mobile fees make me a little worried about whether people will become even more addicted to smartphones.

“Sumaho No” offers some ideas for reducing time spent on smartphones. One piece of advice given in the book is: “Buy an alarm clock and a wristwatch.”

I’m already following another: “Use the monochrome display mode.” I recommend it. This has made me realize how beautifully colored displays beckon our attention.