Vaccine plan to use honor system for pre-existing conditions 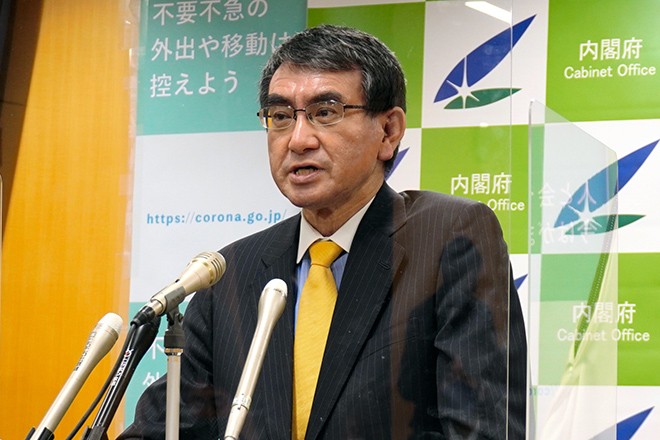 Taro Kono, the administrative reform minister who is also in charge of the government’s vaccination program, speaks at a news conference in Tokyo on Feb. 19. (Junya Sakamoto)

The government plans to provide COVID-19 vaccinations to people with underlying health issues, the third group on the priority list, based on their self-reported conditions instead of medical certificates.

Taro Kono, a state minister who was put in charge of coordinating the novel coronavirus vaccination program, revealed the policy on a news show broadcast by Japan Broadcasting Corp. (NHK) on Feb. 21.

Kono also said the government will present an inoculation schedule for the public this week, suggesting a delay until April in the rollout because of limited supplies of the vaccine.

For the general public, the government plans to start vaccinating elderly people from April. The next group would be people with pre-existing conditions, such as chronic heart or kidney diseases.

However, Kono noted that local governments are not aware of which individuals have such conditions. So the government plans to allow individuals in that category who receive vaccination coupons from local authorities to book inoculations without having to prove their conditions through medical certificates issued by doctors.

The number of health care workers in Japan who wanted to get vaccinated was far more than initially expected, and it will take time for Pfizer Inc. to bolster production.

“We are hoping to proceed with vaccinations of senior citizens from April, but the rollout will be slower,” Kono said.

The government announced a goal of completing inoculations of elderly people in “two months and three weeks.”

But Kono indicated that it would be difficult to achieve in some parts of the country.

“Major cities are unlikely to finish it as planned,” he said. “But local governments can move on to vaccinating the general public as soon as they finish giving shots to old people.”

On Feb. 21, vaccines for about 226,000 people arrived in Japan from Belgium, where Pfizer’s factory is located.