Eateries opening earlier but some stay open late despite pandemic 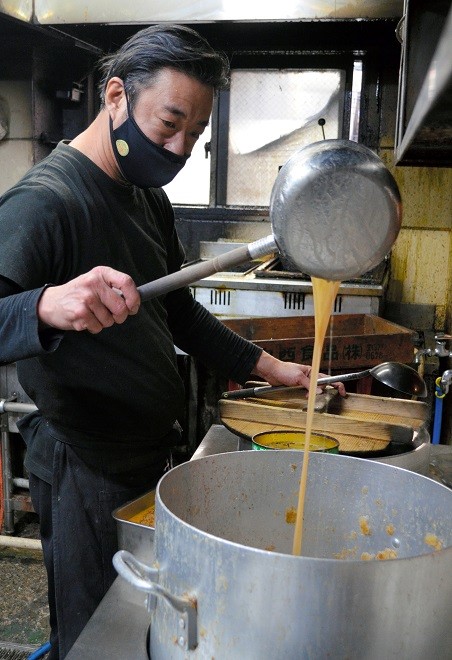 Yukihira Otaguro cooks ramen soup early in the morning at his Ippuku Ramen establishment in the Tsurukawa 4-chome district of Tokyo’s Machida on Feb. 1. (Hiroyuki Kimura)

At 7:30 a.m. on a recent morning, Yukihira Otaguro started preparing ingredients in the still cold kitchen at his ramen restaurant in Tokyo. His pork soup soon began emitting a tasty aroma.

Otaguro, 50, has been working to make up for a decline in income deriving from the pandemic. So, he decided to open Ippuku Ramen in Machida, western Tokyo, at 9 a.m., two hours earlier than in normal times, starting in January.

Ippuku Ramen used to be open from 11 a.m. to 10 p.m. Patrons on their way home from work and school club activities accounted for a considerable number of its customers, and 30 percent of the proceeds would come from those who popped in after 8 p.m.

Along with trying earlier opening hours, Otaguro came up with a “kuji-ramen” meal using whale meat, because the marine mammal is called “kujira” in Japanese and the eatery currently opens at 9 a.m., or “kuji.”

The ramen shop manager said he initially thought that “no one might turn up to have ramen so early in the morning.” But hungry company employees after their night shifts or before going to work and students found the earlier opening time convenient.

The change in hours has resulted in more new customers showing up at the ramen eatery as well, according to Otaguro.

“I had no choice but to eat at fast food restaurants or coffee shops in the morning,” said a man in his 30s who finished a pork broth bowl at Ippuku Ramen after finishing his night shift. “It helps that I can eat a lot.”

Otaguro said, “The practice (of earlier opening hours) has just started spreading, but all I can do is work to get through this tight pinch.”

Along with the ramen shop, a grilled meat restaurant and various other establishments now open earlier in the morning as part of survival measures during the novel coronavirus pandemic.

The attempt, despite the operators’ concerns that few customers may show up during the early hours, has proven an unexpectedly big hit.

The revised special measures law, went took effect on Feb. 13, can slap administrative fines on businesses that do not follow orders for shortening operating hours and other purposes.

As some operators, though, are determined to ignore the orders for their survival, the early-bird strategy is expected to provide a lifeline to struggling restaurants.

In the Shinbashi district in central Tokyo, the Yakiniku Like Shinbashi main restaurant opens its doors at 7 a.m. Especially popular on the morning menu is a 500-yen ($4.74) set meal consisting of 100 grams of rib meat, two sausages and rice, before tax.

As soon as the establishment opens, a steady stream of individuals with empty stomachs fill the tables amid the sound of grilling meat.

“I have fewer drinking parties at night these days, so I have come to eat more at breakfast,” said a 47-year-old company worker while gulping down a bowl of rice. He visited the barbecue restaurant before going to his workplace.

Dining Innovation Ltd., the operating firm of Yakiniku Like, runs that type of eatery at 51 locations nationwide. It started serving meals early in the morning at the Shinbashi outlet and another shop in the capital from last summer.

After the second state of emergency was declared earlier this year, the offering was introduced at no less than 25 outlets. A personal grill is set up for each person so patrons can enjoy dishes isolated from others.

An average of 50 customers drop by the Shinbashi main restaurant, according to its staff, by 11 a.m. per day.

“Wholesalers and part-timers are continuously having difficult times amid the coronavirus crisis,” said Morihisa Arimura, president of Yakiniku Like. “We will keep serving grilled meat early in the morning in the future if we can help them with that.”

On the other hand, some restaurants are accepting customers later than 8 p.m. even after the amended special measures law was put in force. This could lead to them facing punishment for violating the law.

“It will not matter that I have to pay a fine if I can protect my staffers’ lives by doing so,” said a man who runs a yakitori eatery in Shinbashi that stays open until 1 a.m. “Continuing to operate my shop will also help my suppliers.”

The establishment can receive a subsidy of 60,000 yen each day through reducing operating hours in accordance with the government's request, but the sum is not enough to keep its 10 or so staff members on the payroll. It thus continues staying open until late.

After 8 p.m., drinkers who want more alcohol or workers who have just left their offices flock to the yakitori shop and fill all its 90 seats.

The eatery's sales hit a record high for two consecutive months since December last year, while the figure for February is estimated at 1.3 times more than the previous year, according to the manager. Its profit is larger than the maximum possible fine of 300,000 yen.

“I cannot close my store for compensation that I may not be able to receive,” said the yakitori outlet manager in reference to that no compensation plan for losses operators suffer were included in the revision.

A male manager of a hostess bar in the capital’s Kabukicho district also said he “cannot so easily close my establishment” and continues operating the pub until midnight, taking into account the livelihoods of his 10 employees.

The man noted many similar restaurants nearby are still open late at night.

“Once I suspend my store operations, our regulars will go to other open bars,” he said. “If I temporarily shut the doors to make a quick buck (the subsidy), I will face difficulties after the declaration is lifted.”

The bar manager added he “will continue operating the pub unless I am ordered” to suspend it by authorities and will keep watch over how other establishments respond to the situation.

Mototsugu Katagiri, 71, chairman of the Kabukicho Shopping District Association, comprised of restaurant and other operators there, described it as “alarming to see many people rushing to establishments that are still open as an association member.”

Katagiri, however, said at the same time that he “questions the mechanism under which all businesses with different financial situations and differing numbers of staff are treated the same.”

“Operators complying with the request must not be happy, but they are apparently feeling that it would be fruitless to tell other operators to follow suit,” said Katagiri.