Myanmar coup protesters in Japan plead for U.S. to step in 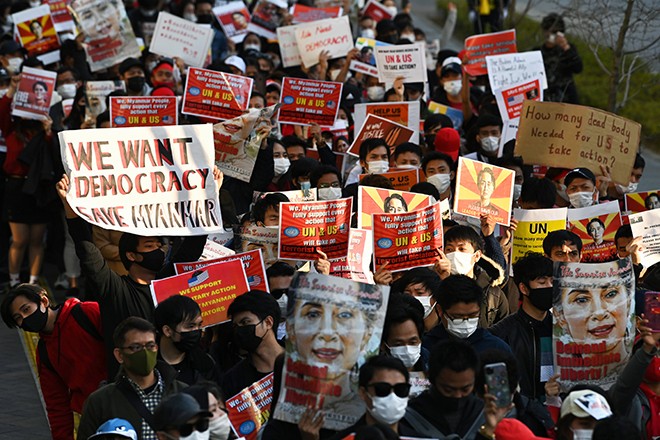 Protesters opposing the Myanmar military coup gather near the U.S. Embassy in Tokyo’s Minato Ward on Feb. 21, a day after fellow demonstrators were fatally shot in their homeland. (Shinnosuke Ito)

People from Myanmar are protesting across Japan following a fatal shooting of fellow demonstrators in their homeland, calling for U.S. intervention to end Myanmar’s military coup.

The Reuters news agency and other media outlets reported that Myanmar’s security forces opened fire on protesters in the country’s second largest city of Mandalay on Feb. 20, killing two men.

Raising U.S. flags and holding signs calling for U.S. support, some 3,500 people protested for about two and a half hours at a rally near the U.S. Embassy in Tokyo the day after the incident, according to organizers.

Protesters raised their fists and demanded the military release the country's leader, Aung San Suu Kyi, who has been detained in the coup.

Some protesters marched through the streets in front of the U.S. Embassy, holding photos of Suu Kyi and signs with messages that included, “Myanmar need your help.”

“I want the U.S. military to intervene as quickly as possible to release Suu Kyi,” said a 26-year-old female vocational school student who participated in the rally. “We need more support from around the globe.”

“We’ve already lost three citizens during demonstrations (in Myanmar), and the Myanmar military continues to commit unforgivable acts,” he said. “Please help us before anyone else is killed.”

About 30 people gathered in front of the U.S. Consulate General Osaka-Kobe in Osaka’s Kita Ward the same day. Together they sang a song associated with the pro-democracy movement and chanted, “Help us.”

A construction engineer, 30, who lives in Kobe’s Hyogo Ward, lamented those killed during the demonstrations in her homeland.

“We are not armed, so we can’t even fight back (when attacked),” she said. “I want more people to know that.”

She said she has contacted her family in Myanmar every day since the military coup occurred. They told her they are unable to sleep at night from worrying about what will happen.

Some 100 people also took part in a protest rally in front of JR Hakata Station in Fukuoka’s Hakata Ward, according to organizers.

For two hours, they chanted, “Give us back democracy” and “We will never tolerate the military coup.”

(This article was written by Azusa Kato, Ryuta Sometaya and Satsuki Tanahashi.)