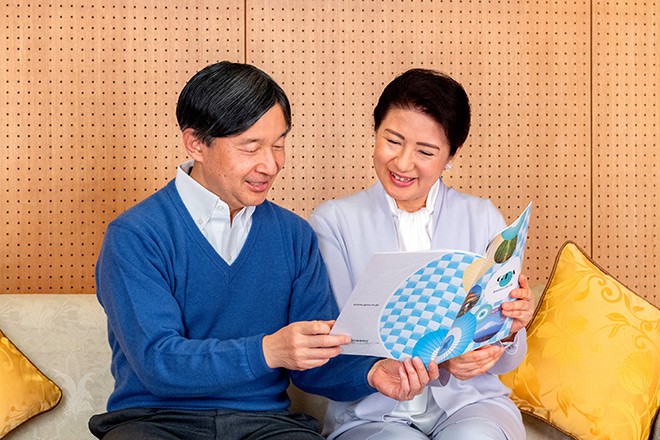 Emperor Naruhito marked his 61st birthday on Feb. 23 while expressing gratitude to the public for their upmost efforts to help prevent the spread of the novel coronavirus.

Devoting more time to the public health crisis, Naruhito also called for continued patience at a news conference held at the Akasaka Imperial Residence prior to his birthday, a national holiday.

“I am hoping that a bright future awaits the public as they wholeheartedly overcome the pandemic while sharing their pain together and cooperating with each other,” he said on Feb. 19, referring to the drop in new COVID-19 cases in recent weeks and the coronavirus vaccinations that began last week with health care workers.

Naruhito said the emperors have always played roles in providing emotional support to the public during times of natural disasters and pandemics.

“It comes from a natural feeling of mine and (Empress) Masako's to give our thoughts, appreciation and encouragement to victims, people with disabilities, senior citizens and people who contributed to society and other people,” he said.

Naruhito said that it is an important duty of the imperial family.

On Masako, he noted that she has not fully recovered from an adjustment disorder that she has had for many years.

The emperor said it is becoming difficult for Masako to improve her condition these days because of restrictions on activities as the pandemic continues.

Turning to their only child, Aiko, who turns 20 this year, Naruhito said, “I would like her to carry out her duties with care, while being grateful to and considerate of other people.”

Naruhito also said he is aware of various opinions among the public about the planned marriage between Mako, the oldest child of his younger brother, Crown Prince Fumihito, and Crown Princess Kiko, and Kei Komuro, Mako’s college sweetheart.

“I am hoping that things will lead to a situation that most people accept and will celebrate,” he said.

On the 10th anniversary of the Great East Japan Earthquake, tsunami and the Fukushima nuclear disaster on March 11, the emperor said he will continue to direct his attention to people in the affected area in the Tohoku region.

He expressed a desire to visit and meet with victims there if opportunities arise.

The visit to the Imperial Palace to celebrate Naruhito’s birthday was canceled due to the pandemic this year, for the second straight year.

(This story was written by Aya Nagatani and Tatsuro Sugiura.)