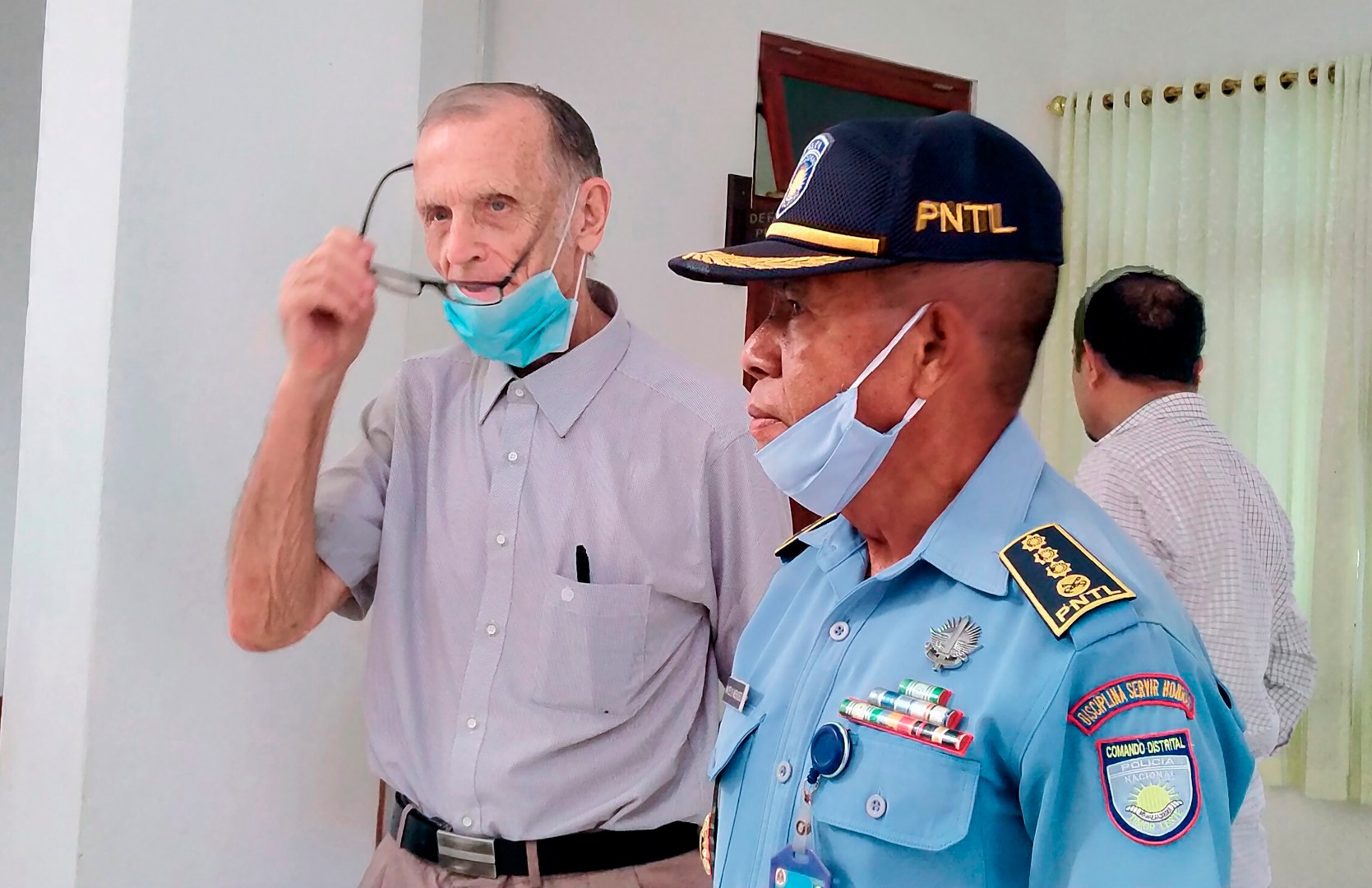 In this Feb. 22 photo a police officer escorts Richard Daschbach, center, a former missionary upon his arrival for a trial at a courthouse in Oecusse, East Timor. (AP Photo)

OECUSSE, East Timor--A defrocked American priest went on trial Tuesday to face charges he sexually abused young girls at his shelter for orphans and children from impoverished families, marking the first clergy sex case to emerge in East Timor--the most Catholic place in the world outside the Vatican.

Richard Daschbach, 84, a former missionary from Pennsylvania, is facing 14 counts of sexual abuse of children under 14 years old, as well as one count each of child pornography and domestic violence, according to the country’s Prosecutor General.

He faces up to 20 years in prison if convicted.

Police presence was heavy at the small courthouse near the beach, as some 100 supporters of the former priest showed up but were denied entry to the courtroom for the closed proceedings.

Devout followers in the young country of 1.3 million--97 percent of whom are Catholic — have been sharply divided by the case, with some families and politicians pitted against one another and tensions so high accusers fear they will be targeted by violence if publicly identified.

Former President Xanana Gusmao, himself a revered revolutionary fighter, was briefly present in the courtroom with Daschbach on Tuesday. The former leader is still very powerful in the country, and some--including his own children--have questioned why he is publicly supporting a man accused of abusing children.

The alleged abuse occurred for years at Topu Honis, a children’s home that Daschbach founded and ran, taking in hundreds of disadvantaged youth, providing them with food, clothing, shelter and schooling.

At least 15 females have since come forward, according to JU,S Jurídico Social, a group of human rights lawyers representing the accusers. But foreign donors who once supported Daschbach believe that there are likely many more victims--possibly hundreds.

An official at the Catholic church in East Timor’s capital, Dili, said Daschbach was defrocked in 2018 after he confessed to sexually abusing the children. The female accusers have alleged everything from fondling and oral sex to rape. Former donors also said he admitted it to them. While the former priest has not done so publicly, last month he told local reporters that his message to the children in the orphanage is this: “Be patient. We won’t meet again because I will be detained for life, but I will still remember you and you have to be happy there.”

The trial was initially scheduled to start on Monday, but judges asked for a one-day delay so they could revise documents.

Daschbach, who also secured American funding, is wanted in the U.S. for three counts of wire fraud. An Interpol Red Notice has been issued for his arrest.