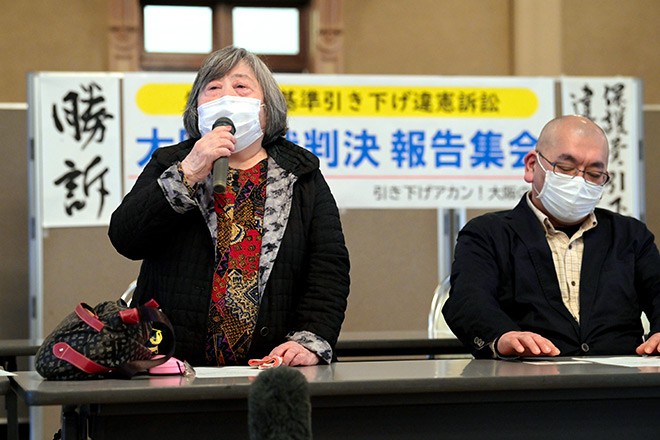 Aiko Kodera, head of the plaintiffs, comments on the Osaka District Court’s ruling to their supporters in Osaka’s Kita Ward on Feb. 22. (Tatsuo Kanai)

The court cited the central government's use of an unreasonable and inappropriate consumer price index system used to calculate the rate of falling prices.

In the ruling, Presiding Judge Hajime Morikagi of the Osaka District Court said the cuts, made between 2013 and 2015 and based on the central government’s reviewed welfare benefit criteria, amounted to violations of the Public Assistance Law.

The judge acknowledged that the welfare minister deviated from its discretionary powers on the grounds that there were “errors and deficiencies” in the process and procedures to revise the criteria.

In the group lawsuit, about 40 welfare recipients in Osaka Prefecture demanded that local governments nullify their decisions to reduce benefits for three years from 2013, arguing the cut runs counter to the Constitution, which guarantees “the right to maintain the minimum standards of wholesome and cultured living.”

However, the court did not rule on the constitutionality of the welfare benefit reduction but how it was determined.

The ruling came more than six years after the suit was filed at the district court.

Tetsuro Kokubo, deputy head of a team of lawyers representing the plaintiffs, hailed the court's decision.

“It was a long fight, but the ruling made me feel that the court system is still alive,” he said.

Aiko Kodera, 76, and who heads the plaintiffs in Osaka Prefecture, said she was “proud” of the Osaka District Court decision.

“The ruling in favor of the plaintiffs may provide the momentum to other lawsuits across the nation,” she said.

The decisions by local authorities to reduce the amount of welfare benefits was made on the basis of the welfare benefit criteria, which designates Japan’s poverty line.

The criteria also serves as a key index for deciding on the amount of school expense subsidies and minimum wages.

The central government sets thecriteria under the Public Assistance Law, which stipulates qualifications to receive benefits.

At the center of the court battle was whether the welfare minister’s decision to curtail the amount of welfare benefits under the criteria was made within the range of its discretionary powers.

Between 2013 and 2015, the central government reduced the amount of livelihood assistance portion of welfare benefits, such as expenses to cover food and utilities, by up to 10 percent from the previous figure.

In doing so, it used its own index calculating the rate of falling prices.

The district court recognized that the welfare minister has the discretion to decide on the amount of welfare benefits based on budgetary and professional perspectives.

But the ruling pointed out a lack of reasonableness and consistency in designating 2008 as the starting point of reflecting fluctuations in prices in the welfare benefits, which had remained unchanged since fiscal 2005.

The court said 2008 was an unusual year that saw a spike in the consumer price index, for the first time in 11 years, on the heels of global surges in crude oil and grain prices.

If 2008 is designated as the starting point, the extent of declining prices in the ensuing years was large and the resulting cut in welfare benefits was therefore inappropriate.

Another point of contention was the welfare ministry’s use of its own index that takes into account the rate of price drops among TV sets, personal computers and other electronic devices.

The plaintiffs contended that such an index should not be used because welfare recipients cannot afford the same amount of spending on those products as ordinary households, while the price drop rate is usually larger in these than in other goods.

Siding with the plaintiffs, the court decided that the ministry’s index was not reasonable as it is not justified by supporting statistics and data compiled by experts.

The court ruled that the welfare minister went beyond the boundary of its discretionary powers due to those errors and deficiencies in the central government’s process and procedures to revise the welfare benefit criteria.

As a result, the decisions by the Osaka city government and other local governments must be nullified, the court said.

After the court decision, an official with the Ministry of Health, Labor and Welfare said the ministry will respond after studying the court's verdict and consulting relevant central government ministries and agencies, as well as local governments.

Similar lawsuits have been filed at 29 district courts around the nation.

The Osaka District Court’s ruling marked the second in the suits and the first in favor of the plaintiffs.

In a verdict handed down in June, the Nagoya District Court dismissed the plaintiffs’ demand, recognizing that cutting welfare benefits were within the discretion of the welfare minister.