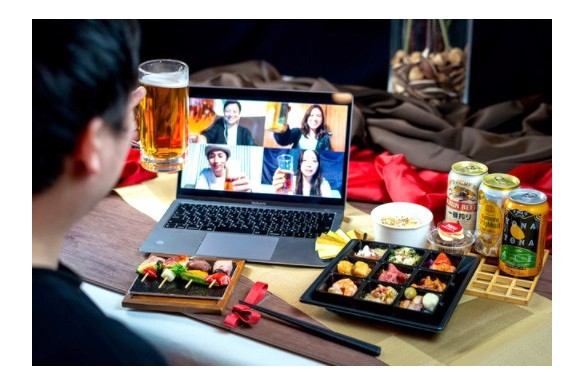 A consumer has the same things as other participants at a drinking party through video calling thanks to Nonpi Inc.’s Foodbox ready meal delivery service. (Provided by Nonpi Inc.)

The ongoing pandemic has upended shared meals with friends and boozy work-related events--key social lubricants that pose risks amid the health crisis.

But necessity is the mother of invention, and in the wake of Japan’s teleworking boom come services that allow people to once again share a bite to eat and throw back a pint or two, but from a safe distance.

Nonpi Inc., a start-up firm based in Tokyo’s Minato Ward, is winning over customers with its new delivery service that caters cooked meals and beverages to individual households for online video parties.

“We, senior officials, gave it a try and found it more fun than expected,” said Shuichiro Kamigata, 34, executive vice president of Nonpi, of a drinking party held by video conference. “The idea came out of conversations about how pleasant it is to share a meal, even when people are distant from each other.”

It comes as more consumers turn to functions held through video calls instead of meeting up at restaurants, bars and other public places.

The program was created with “last-ditch determination,” after Nonpi saw demand for its core catering business nosedive due to the ongoing health scare.

Since Nonpi was established in 2003, it has relied on two business pillars: operating cafeterias for staff at Mitsubishi Estate Co., Line Corp. and other large companies, and running a catering service for corporate customers.

A far larger number of people began working at home once the state of emergency was declared last spring. Cafeteria sales at almost all its customer companies dropped by half. On top of that, Nonpi was receiving virtually no catering orders. Its sales in May last year dropped 95 percent from the year prior.

Nonpi tried to build new sales channels by selling products for families to hold parties within households and boxed meals for employees who cannot work from home. But those efforts fell flat.

Then it began considering a service designed for social functions held over video calls--a practice that had just started becoming common at the time--as its next approach.

With its experience in the catering business, Nonpi was confident its cooks would be able to develop dishes that are tasty even after they get cold.

Nonpi’s master chef had worked at the Japanese subsidiary of Google Inc., which is famous for having high quality meals at its cafeteria, and proposed specialties that pair well with alcohol.

The cooked dishes go into a dedicated container so they can be shipped nationwide using Yamato Transport Co.’s refrigerated delivery service.

It launched the Nonpi Foodbox program in August last year aiming to cater mainly to its corporate clients. But it was quickly flooded with inquiries from other businesses wanting to organize receptions for new recruits online in October.

In December, when many people drink at “bonenkai” year-end parties, it shipped out no fewer than 40,000 boxes of its Foodbox product.

Nonpi had remained in the red throughout the novel coronavirus crisis, but it was finally back in the black in December. With the Foodbox service alone, Nonpi’s sales were 2.5 times as large as the same period from a year earlier.

Since its release, a total of 2,000 companies have used the food delivery service, according to Nonpi representatives.

Foodbox is available at a price range from 3,000 yen ($28.50) to 5,000 yen per person, and comprises nine kinds of food, including the “pintxo” appetizer and roast beef, along with three alcoholic drinks, such as canned beer.

It also offers a tea-based lunch set at 3,000 yen, while another package it has priced at 9,000 yen is intended for companies that hope to wine and dine officials from their client businesses. It can also serve individual customers.

There are other operators providing similar delivery services, but Nonpi said its strength lies in its easy-to-use reservation system developed by its software team.

When event organizers apply for food delivery online, it issues a URL for a special site where participants can choose what they want to drink and then enter their addresses.

This saves the hosts from the trouble of collecting information from all the attendees.

Kamigata said that “demand will stay at a certain level for functions via video calling even after the end of the coronavirus pandemic” because people can sip alcohol at their own pace, unlike parties at “izakaya” pubs.

Participants also do not have to worry about missing the last train to get home, he added. Plus, video conferencing banquets are also easier to attend for those with small children.

Kamigata said the advantages of online functions recently discovered by consumers, coupled with the boom from Uber Eats and other similar food delivery services, should help fuel the trend.

“As a food-tech company combining food with IT (information technology), we will lead the industry,” he said with determination.